Luxembourg enhanced the love of basketball for Samantha Cooper 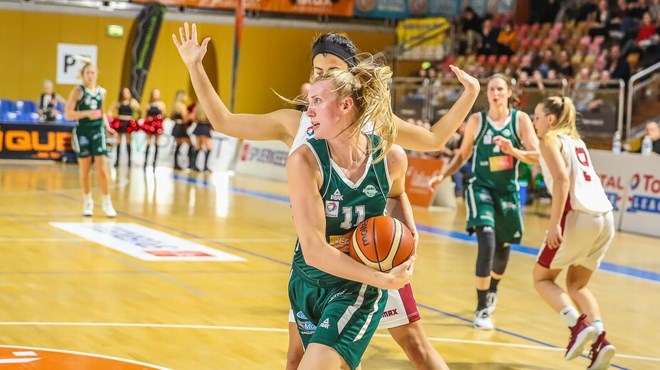 Lockerby Composite alum Samantha Cooper has grown her love for the game of basketball playing professionally in Luxembourg. (Supplied)

Competing as a member of a professional women's league in Luxembourg, capturing the championship final as a key component of the BBC Grengewald Hueschert, this simply took her affection for the sport to a whole other level.

"I learned how truly awesome it is to be able to play basketball, overseas, and do something that you love, and do it as your job," said the highly decorated graduate of the Fairfield University Stags NCAA Division I program.

"Waking up every day and thinking that I can't believe that I am doing this was really cool."

Cool, perhaps, but not without demands. All ten teams in the National Dames Ligue 1 can carry two North American imports on their roster, along with one other player from a European country other than Luxembourg.

The remainder of the team was home grown talent, but also women who generally worked at very least part-time, if not full-time, during the day. The need for the three imports to step up and lead the way was clear.

"The work ethic was spot on, from the standpoint that as a professional, you're expected to do these things," said Cooper. "The three of us would workout in the morning with the coach, then on to lifts, then a full practice in the evening. It was nice to have that role, but it can be kind of stressful at times, where the coach will say that he needs us to score 15 to 25 points, every game."

While there were many aspects to her first year of pro basketball that helped to make the entire season a very satisfying one for the product of Lockerby Composite, Cooper's development on the court would certainly rank near the top of that list.

"I think my game evolved a lot," she said. "It's a very European style of basketball. In the States, and especially at Fairfield, we did a lot of play-based offense, whereas there, it's more get the ball and go, pass the ball up as fast as you can and let's try and score lay-ups.

"It was very up tempo, high scoring, which I loved. My coach and I worked a lot on ball handling stuff, because it went with their style. That was really good for me, because I wasn't second guessing myself, looking for the point guard. I was just going myself.

"I've always been in pretty good shape for a forward, so this really utilized my skill set well."

Beyond the basketball, there was plenty to like of year one in Europe. In fact, Cooper had been quite candid in the summer of 2018 when she explained that part of the attraction to this opportunity in Luxembourg would lie in the life experiences it created, most notably on the travel front.

Cooper would visit a total of six different countries over the course of the 2018-2019 season, even squeezing in a trip to the Spengler Cup with her mom and dad (Joanne and Grant), visiting over an abbreviated Christmas break.

"Taking a train through the Alps and through Italy, well, nothing could really compare to that, especially with having my parents there," said the 24 year-old Sudbury woman. "I just find the lifestyle is so relaxed."

Even the trajectory of the Grengewald Hueschert season provided something of a storybook element to her year. Following a home and home series between all ten teams in the league, the top six moved on to a playoff round, with Cooper and her mates slipping in by the skin of their teeth.

From there, it's another double round robin to whittle their way down to a final four, with the eventual league champs just barely making the cut.

"This was the first time in our club history to ever make it to the semi-finals," said Cooper.

"At the beginning of the year, you would look in the stands and there were maybe 100 people. By the end of the season, they're bringing out extra stands, putting chairs on the baselines. It was just packed. It was nice to see how much they appreciated how much we cared about the basketball."

The year also allowed Cooper to dip her toes in the coaching ranks, even if it would be limited to serving as an assistant coach with a group of 11 and 12 year old girls.

"I actually really liked it, teaching them the basics," she said. "It was more tough than if I had done it here, becasue at first, there were a lot of hand signals."

Generally speaking, children in Luxembourg are quite multilingual, though any one of Luxembourgish, French or German could serve as their primary language.

Still, for as great an experience as the past twelve months proved to be, Cooper suggested that 2019-2020 might involve another move.

"They offered me the chance to come back," she said. "It's a very safe country, I'm making pretty good money, and I can travel easily, which is all really nice. But in the back of my mind, I really want to see what else is out there, hopefully moving up to a higher league, building my way up. I want to keep having fun and playing basketball, but my ultimate goal is to see how high up I can go."

And while the academically gifted local might still follow her dreams of a career in optometry, at some point, the mirror mirror on the wall is becoming more understandably blurry.