Haley Maziarski has one thing on her mind when she hits the ground cross-country running: Pushing herself beyond her limits. It doesn’t matter if it is a race or training session, Maziarski is going all out.
Oct 5, 2011 7:50 PM By: Scott Haddow 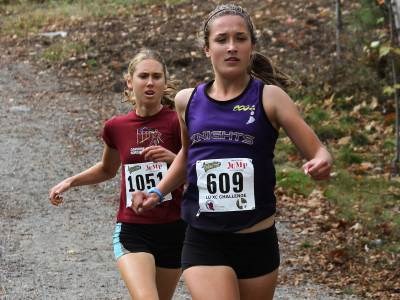 “I love the feeling of having nothing left inside me after a run,” the Grade 11 Lo-Ellen Park student athlete said. “It's the only feeling I want after I run.”

Maziarski, 15, has been competing in cross-country running since Grade 6. She has had, in her own words, modest results over the years.

In the last two years, her game has reached new heights as a more deeply rooted commitment to the sport has emerged in her. Maziarski proved she was serious about cross-country this past summer as she spent most of her free time training non-stop with her older sister Katie, a Laurentian University cross-country varsity team running member.

It paid off as Maziarski exploded on the fall cross-country running scene, winning the first two high school preliminary events at Lockerby and Windy Lake.

The big performance for Maziarski was at the 2011 Sudbury Masters Ramsey Tour five-kilometre event. She raced across the finish line with a personal best time of 19:36.80, placing third for females and 18th overall in an event that featured veteran university competitors and other competitors twice her age.
“Before this year, I had never broke a sub-20-minute mark in a five-kilometre race,” she said. “This summer, I ran more than I ever had done before. I was motivated. I wanted more.”

She said she spent the summer doing long run after long run with her sister.
“She is always making me go faster. I’m happy with the results so far.”
Maziarski even gave up basketball to focus more on running.

“I think I can go further in running than any other sport I play,” she said.
And she competes despite circumstances, weather or even injury.

Last Thursday, Maziarski competed in the Laurentian University X-C Running Challenge, even though she was dealing with pain in her foot. She was forced to pull out about halfway through as the pain was too intense. Maziarski went to the hospital and found out she had a stress fracture in her third metatarsal and was fitted with a walking cast Friday morning.

Most athletes would hit the brakes in that situation and take it easy for two weeks. Not Maziarski. After receiving the cast on her foot, she didn’t hesitate to kick-start the rehabilitation process — she went for a 40-minute bike ride and followed with another 40 minutes in the weight room.

“There’s no stopping her,” Lo-Ellen Park cross-country running coach Colin Ward said. “She’s genuine and dedicated and has a lot of focus. She knows what she has to do.”

Maziarski has come a long way in a short time, and her commitment to training has been the key, the coach said.

“She has embraced running and she has done nothing but climb,” Ward said. “She is one of the few kids who actually trains for cross-country. Her Ramsey Tour time was the best of any athlete I’ve ever coached at Lo-Ellen Park. She has the potential to just get better — she’s done nothing but get better over the last two years, so I don’t see why it wouldn’t continue.”

However, it's about more than determination and hard work. For Maziarski, running is in her blood. In addition to Katie, Maziarski's mother and father were both competitive runners, and her older brother, Joel, competes as well.

Family is where running started for Maziarski. Almost every conversation revolves around or ends with her family and the influence they had on her running ambitions.

“I wouldn’t be where I am today if it wasn’t for my family and coach Ward. They push me every day to be better,” she said. “I can’t ever remember Katie not running. I never thought I would be able to keep up with her. I don’t think she really knows how much she inspires me.”

One of Maziarski’s biggest fans is, of course, Katie. She has humbly enjoyed the front seat to watching her sister not only progress in the sport, but become a serious contender.

“Haley is creaming me at races now,” Katie said with a laugh. “I could see it coming a mile away. She is just flying at running now. I am proud of her. It’s awesome to have her because she inspires me. We push each other to train harder. She’s like a permanent training partner … it doesn’t get any better than that.”