Sitting fourth after their short program in the pairs competition at the Canadian Figure Skating Championships in January, Lively native Meagan Duhamel and new partner Eric Radford knew their chance at the worlds could be slipping away.
Apr 20, 2011 3:51 PM By: Randy Pascal 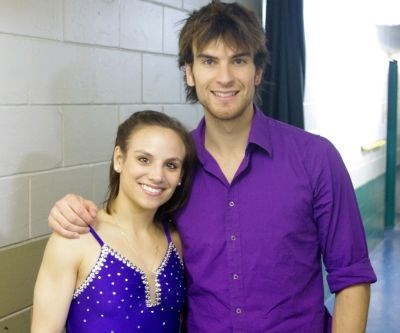 Meagan Duhamel, of Lively, and pairs skating partner Eric Radford are competing at the 2011 World Figure Skating Championships in Moscow later this week. Photo by Randy Pascal.
Sitting fourth after their short program in the pairs competition at the Canadian Figure Skating Championships in January, Lively native Meagan Duhamel and new partner Eric Radford knew their chance at the worlds could be slipping away.

But after battling back to finish in the top two and earning their berth on the Canadian team, they are certainly not about to let a one-month delay throw them for a loop.

The northern Ontario tandem, who were at the McCelland Arena on Saturday night as part of the Copper Cliff Skating Club year-end gala, recently left for Moscow to compete later this week at the 2011 World Figure Skating Championships.

The event, originally scheduled for Tokyo, Japan last month, was moved in light of the earthquake and tsunami which struck the area.

In a sense, the delay might actually have proved helpful to Duhamel and Radford.

"In our case, because we are such a new team, we have so much more to work on and so much more room to grow, having this extra time is probably more of a benefit than it is to some other teams," Radford said. He is originally from Red Lake, located in northwestern Ontario.

"Other teams are just maintaining, we're still improving," he added.

In light of the roller coaster ride that has been her skating career over the past six or seven years, which included dealing with the post-Olympic retirement of former partner Craig Buntin, Duhamel remains optimistic.

"The last year was really tough, with the stress of the Olympics and then not making the Olympic team," she said. "That's something that you can't really prepare yourself for. If I was going to keep skating, it was because I was having fun and enjoyed it.

Radford and Duhamel knew each other from being at the same competitions in northern Ontario in their younger years.

"I don't think it ever really occurred to us to start skating together until our coach mentioned it — and even when he did mention it, I think we were both a little skeptical," Radford said.

"Our first tryouts that we did weren't very good," Duhamel said, with a laugh. "Just the dynamics of doing a lift with someone as tall as Eric. The throws weren't very good because we both had different timing. But our coaches were really confident that it was going to be fine.”

Within a week or two, things started coming together, as both Duhamel and Radford recognized that their skating styles and rhythms were actually quite complementary. It set the stage for some aggressive goal-setting, despite the pair not having yet celebrated one full year of skating together.

"When you look at the scores we received in Taiwan (Four Continents Cup) for our long program, that's a top five score," Duhamel, a product of the Walden Skating Club, said. “We want to repeat that performance and add a clean short program to it."

While performing at a regional year-end gala might not represent the ideal training only a week before World Championships, Duhamel and Radford clearly see the benefits.

"During a show routine, you get to concentrate just on performing, which is your goal when you get to competition," Radford said. "But it's so much more difficult there, because you have technical elements that you want to perform at the same time."

"We have also decided to include, along with our pairs tricks, a lot of difficult elements," Duhamel said. "We're trying to have fun and enjoy the performance, but also incorporate the throws, the lifts, the jumps that we do in competition."

And they also got to enjoy a walk down memory lane. In the winter of 1997, Duhamel and Radford were both at the McClelland Arena, competing at the northern Ontario Interclub meet. In fact, both skaters won their respective pre-juvenile singles groupings at that time.

Some 14 years later, they're hopeful that a pairing of their respective talents will produce similar results half a world away.