Midget Lady Wolves hit the ice with a mission 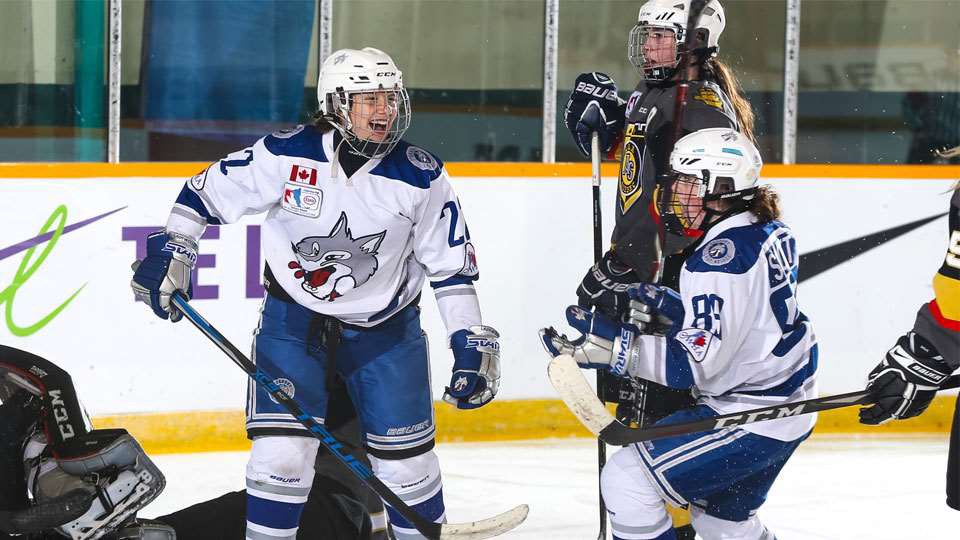 The Sudbury Midget AA Lady Wolves claimed silver at the 2018-19 Esso Cup and are looking to build on last year's success. (Supplied)

The Sudbury Midget "AA" Lady Wolves are going to be just fine, thank you very much.

That is the word from the man who guided the team to a silver medal performance at nationals one year ago.

The 2018-2019 team was set to graduate eight 2001 birthdates, but it was the decision of another five players with midget eligibility to play in the PWHL (Provincial Women's Hockey League), leaving for Ottawa, Mississauga and Oakville, that beckoned the question of just how likely the locals might be to defend the Ontario title they captured one year ago.

"I told the girls, let's cast our own shadow - we don't want to walk in somebody else's shadow," said head coach Jay Duncan last week, his team preparing for an early season three game exhibition series down south, one which produced three straight victories.

"We were a good team (last year) and we did great, but our goal is to do even better this year."

"It's a different group, a different dynamic, a fresh start, which I'm excited about," added Duncan.

Though the Lady Wolves return six members of their Esso Cup silver medal winning team, it's the influx of five players from either North Bay and Sault Ste. Marie, along with a core of locals just chomping at the bit to take their shot at this level that has the Sudbury staff particularly re-energized.

"Truth be told, I know these kids, even the kids from out of town," said Duncan. "I know who they are, I know what they can do. We have a very good skating team, and we have three defencemen that return, and another who played for me the year before. As long as we can keep pucks out of our net, we'll find ways to score."

Some of that offensive responsibility will fall on the shoulders of Saultite Luca Rebek, a 17-year-old forward who will now attend Lo-Ellen Park Secondary for her final year of high-school studies.

"I wanted a new challenge," said Rebek, whose father Jeremy enjoyed a three year run in the OHL with the Owen Sound Platers, before completing a 17 year professional career in hockey with eight years in Austria.

"The Sault was a good level of hockey, but not the highest," she said. "I knew from last year that Sudbury had a really good team and had a good reputation, so it's something new and different and challenging."

The season might be only a few weeks old, but Rebek is quickly noting the adjustment that is needed.

"I feel it's a lot faster already, a lot more intense," she said. "All of the girls want to be here. It's been a good move, the girls have been really welcoming and nice, but it is hard being away from family and friends."

A grade 12 student at Collège Notre-Dame, Joelle Gagnon is certain to experience far less of an upheaval, having played at the "AA" level previously within the Sudbury Lady Wolves program.

But after suiting up with the Midget "A" team the past few years, the well-spoken 17-year-old is ready to climb the ladder, once again.

"For me, it's reaction time," said Gagnon. "Playing "A" is still a challenge for me, but playing "AA", the intensity and quickness in making smart hockey decision, it's much faster than with lower levels. Making the right play with less time will be crucial for my game."

As for any potential lack of chemistry, icing a lineup that now includes players who might have been life-long adversaries, Gagnon suggested that the pros outweigh the cons.

"It's definitely new and different," she said. "I think it's good to have new blood within the team, just to try new things. Having the imports here is really awesome, I'm glad they have the opportunity to play with us."

At the end of the day, the girls are united by a handful of common goals.

"Playing at this level, I'll have a lot more exposure," said Gagnon. "That's the ultimate goal for me, to play university hockey. And I think for a lot of the girls, that's the goal for them."

The Lady Wolves blanked the Scarborough Sharks 3-0 to raise the curtain on a new year of hockey, with Ashtyn Denomme, Aoife Mahaffy and Jenna Lachance scoring in support of the shutout performance of Madison Brunet.

The girls made it two for two, edging the Whitby Wolves 2-1 (Jayden Denomme, Vanessa McKinnon), and closed things off with another 2-1 victory, this time downing the Ancaster Avalanche (Rebek, Mahaffy).