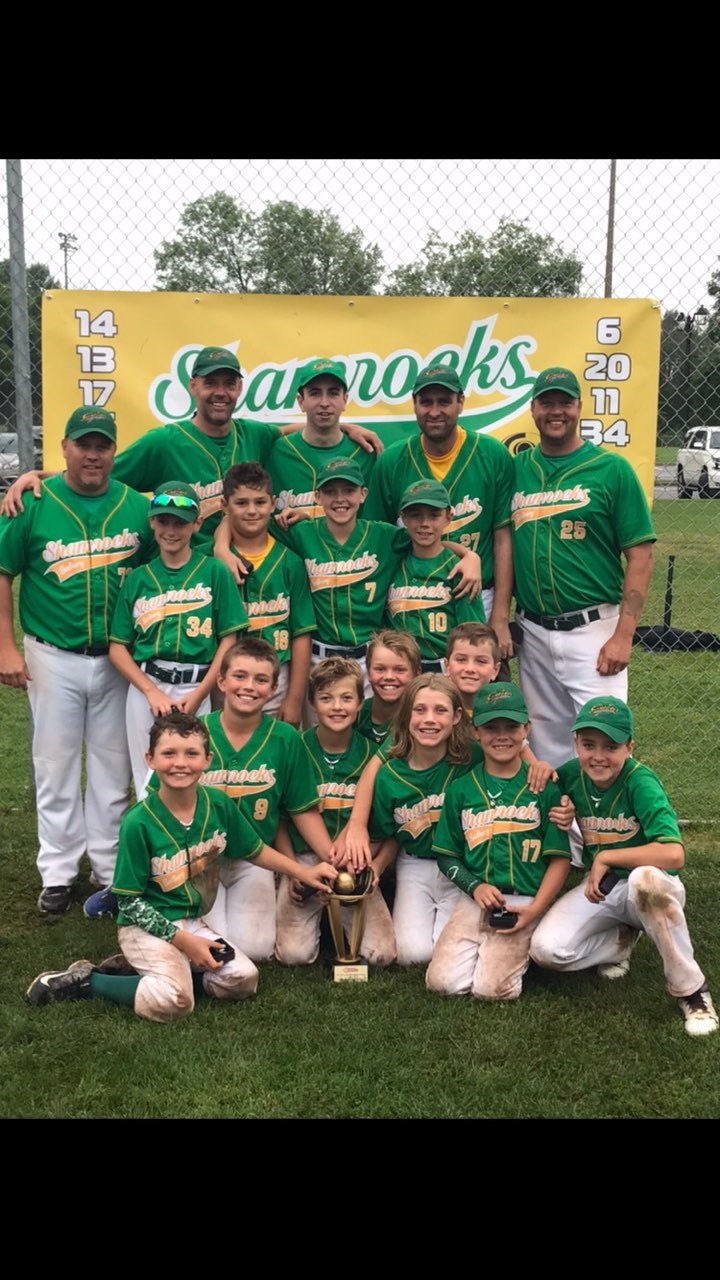 Three one-run, come-from-behind victories, two in their final at bat, tells you pretty much everything you need to know about the Sudbury Minor Mosquito Shamrocks.

On the field for almost 24 full hours in a span of just two days, the local squad survived a Sunday morning loss in the double-knockout Softball Ontario provincials, forging forward to claim gold later in the day with a 10-9 win over the Guelph Royals.

"We notice it on the bench," said Head Coach Derek Goudreau. "Nothing is ever out of reach for this team, all it takes is one inning. Time and time again this year, these guys were able to string together big innings to come from behind for the win."

Thankfully, it was a trend that continued as the top U10 "A" teams in Ontario gathered in Oshawa on Labour Day weekend.

The pitchers on both sides took a little while to settle in as the Shamrocks bounced the Burlington Bulls 24-15 in Game One on Friday. "It was back and forth, and the boys just strung together a couple of really good innings, and that allowed us to take over the game."

Despite the Oshawa Legionnaires taking an early lead in the next morning’s game, Sudbury came from behind once again, squeezing out a 12-11 triumph.

The back-to-back victories provided the Shamrocks with a bye into the Saturday evening match, with the team riding a strong pitching performance from starter Adrien Potvin en route to a 12-3 win over the Barrie Baycats.

Faced with the opportunity to earn a berth directly in the final, the Shamrocks hit a bit of a road bump Sunday morning, falling 18-12 to the Sarnia Braves. But when the two teams met up in the semi-finals, it was a different story.

"The one thing that we noted with them (Sarnia) is that they wouldn't swing," said Goudreau. "So what we did is to pitch our guys that throw strikes (Potvin, Blake Chenier), and not necessarily our kids that can throw the hardest, force them to swing."

While the strategy helped, the locals still found themselves trailing by three as they came to the plate one last time. "It was just a rally," said Goudreau of the surge that would lead to an 11-10 semi-final win.

In the final, Sudbury found themselves trailing 9-7 heading to the bottom of seven.

"Robert Landry, one of our new players this year, hit a double that started the rally," said Goudreau.

Owen Lamothe scored the game-winning run, racing home on a passed ball as the Shamrocks made it back-to-back titles at provincials, after claiming the SOBA (Select Ontario Baseball Association) banner last September.

"We worked a lot on defence this year," said Goudreau. "Every practice, we worked on defence. And we tried to develop as many pitchers as we could, because of pitch counts and stuff like that. If we ran into one pitcher who was struggling, it was easy to switch somebody else in."

Looking forward to the summer of 2020, Goudreau stated that the plan, right now, is to enter a couple of "A" tournaments, but also some open tournaments to see how the boys fare against "AA" and "AAA" teams, contemplating a possible step forward in levels.

It seems like these boys could well be up to the challenge.

The Minor Mosquitos weren’t the only medal winners at the provincials this past weekend. The Major Mosquitos also won the gold medal in their division. Sudbury.com will bring you that story in the coming days.

As well, the Valley East Minor Baseball Association VEMBA Junior Voyageurs and the Sudbury Minor Baseball SMBA Shamrocks Bantam (15U) Teams made it all the way to the semi-finals at the OBA before being eliminated.