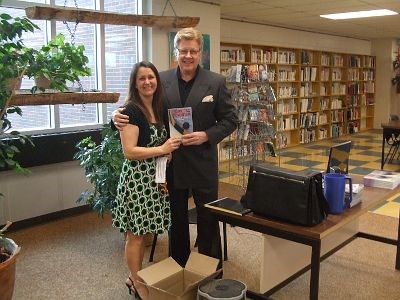 After 12 years in the NHL, Sheldon Kannegiesser has a few stories to tell.

He shared his personal and professional anecdotes with students at Lasalle Secondary School March 31, as he read excerpts from his book Warriors of Winter: Rhymes of a Blueliner Balladeer. The book is a collection of poems about his former days in the NHL.

Kannegiesser, who was born in North Bay, played more than 400 games in the NHL during the late 1960s and 1970s with the New York Rangers, Pittsburgh Penguins and Los Angeles Kings.

Consisting of 31 ballads and more than 50 photos, the book Warriors of Winter: Rhymes of a Blueliner Balladeer provides the reader with an inside perspective of the game of hockey like no other, a press release stated.

Kannegiesser takes the reader for a ride on the Iron Lung, an old beaten down bus in the Central Hockey League. In his ballad "Donuts," Kannegiesser tells an entertaining tale about his defence partner, Tim Horton, and how he turned down his offer to get in early on the donut franchise.

Kannegiesser also read excerpts from his new book The 7 Pillars of Personal Achievement.