No QB, no go, as Spartans bow out of NFC playoffs 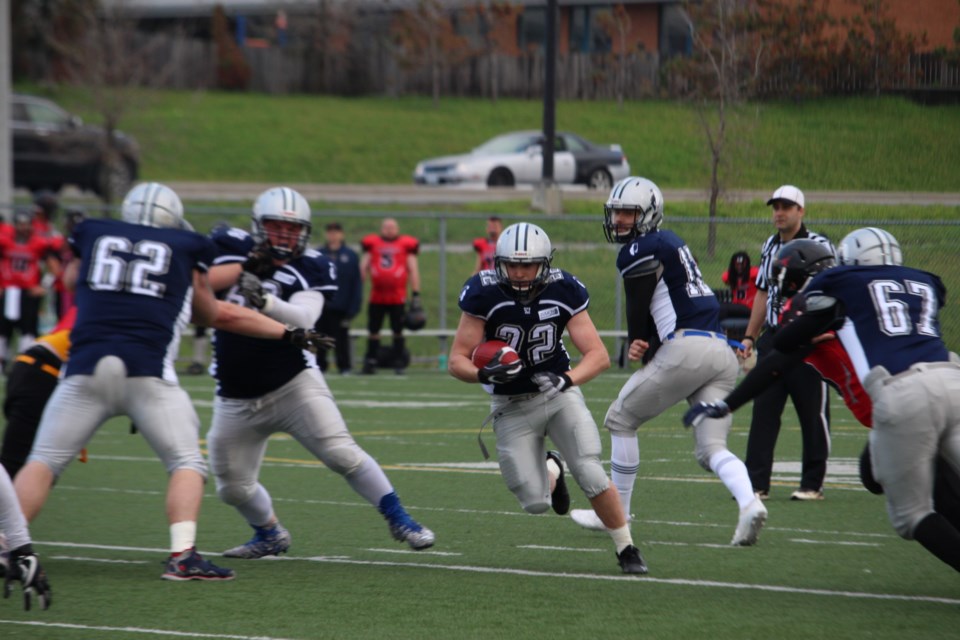 The Sudbury Spartans would have dearly loved to have their quarterback back. Any of them, really.

With Hunter Holub, Adam Rocha and even third-string option Nicholas Rideout out with injuries, it was defensive back Riley Roy who was pressed into action. Yes, the Riley Roy who, by his own admission, had never even taken a snap under centre dating back to his days in the Joe MacDonald Youth Football League.

So, despite the best efforts of Roy, who also played safety for virtually the entire game, and a Sudbury defensive unit that managed to keep things close, at least until half-time, the inevitable played out, as the Ottawa Sooners pulled away from the Spartans to the tune of a 41-0 scoreboard, eliminating the locals from the NFC (Northern Football Conference) playoffs.

Adding a little salt to the wound was the fact that it was former Spartans' QB Travis Campbell who guided the visitors to victory, completing three touchdown passes, all to Alex Gauthier (16, 20 and 38 yards).

Rushing majors courtesy of Remy Cimakinda (5 yds), Brandon McDonald (47 yards) and Dylan Hines (1 yard), along with three PATs from Gauthier and a two-point conversion on a toss from Campbell to Bobbi Marcil Massé, all of which rounded out the scoring for the Sooners, who will now advance to face the GTA All-Stars on August 10th.

Though the Spartans' offense was pretty much stymied for most of the sixty minutes, interceptions by Matt Furino, on the very first play from scrimmage, and Ben DeBenedet provided at least a couple of occasions for excitement for the fans on hand.

With Josh Cuomo still nowhere near 100 per cent healthy, running back Matt Glass carried the load, quite valiently, facing a defence that simply had to know that they could focus on defending the run, almost every single play.

"When you don't have a quarterback, it's demoralizing at times," acknowledged defensive end Brandon Soucy, who was in on a pair of sacks, joining veterans Kevin White, Kyle Henri, Andrew Gillis and Erik Conrad in putting at least some pressure, from time to time, on Campbell.

"At the end of the day, you just have to try your best. You just keep going. We can't give up on each other."

If there was a silver lining to be taken from this loss, it was that it came at the end of an otherwise pleasantly productive campaign, a summer in which a large number of very youthful Spartans, left without a varsity football (ages 16-20) option this year, garnered some extremely valuable experience at the next level.

"We were young and I think we had a lot of question marks at the beginning of the year," said Soucy. "I think a lot of guys answered them. We had a lot of rookies go in and start positions, and near the end of the year, we came together, especially defensively, we got better."

Soucy is a testament to this growth. A life-long goaltender with junior hockey experience, Soucy played only one season of high-school football, and that was in a victory lap effort while attending school in Toronto.

Now in his second year with the Spartans, he is still hopeful that it's not too late to attract some university attention, a goal that will require even more improvement as he plays catch-up with the competition.

"I think I've got to work on my speed, my speed off the line, getting my hands moving in there," said Soucy. "I really only had first moves and everyone else had developed all of these other hand moves. I'm getting better, and I'm going to try and keep getting better."

And while that might bode well for the summer of 2020, there is still some uncertainty in the air that remains to be resolved. "It looks like we are going to have that senior Spartans team (varsity OPFL) come in," said Soucy.

"Some guys might drop down, some guys might stay, it depends on how they do it. For the most part, I think a lot of the guys like this team. If they're around, they will be here."

For as much as many a local football fan might have trouble connecting with the motivation that drives these grown men to return year after year, it is clear there is a very real draw, at least for the chosen few.

"I think we just love being around each other," said Soucy. "You see the same group of guys at practice every day, we love hanging out with each other, the bus rides are awesome. To be honest with you, there's never a bad time."

Even after a lopsided playoff loss.

Five beat division-leading London Lightning
Feb 15, 2020 4:00 PM
Comments
We welcome your feedback and encourage you to share your thoughts on this story. We ask that you be respectful of others and their points of view, refrain from personal attacks and stay on topic. To learn about our commenting policies and how we moderate, please read our Community Guidelines.