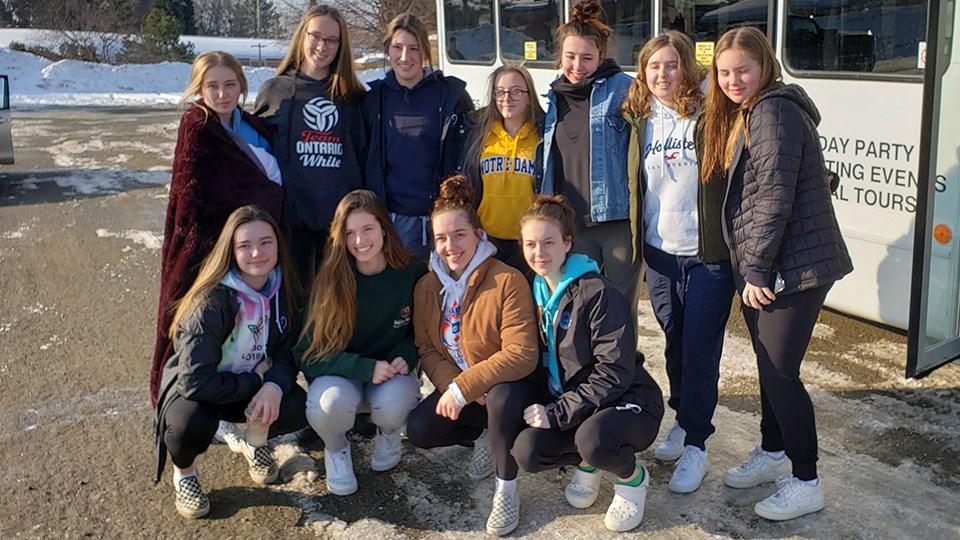 Literally four years in the making, the College Notre-Dame Alouettes senior girl volleyball crew just barely squeezed in their appearance at the OFSAA Girls A Volleyball Championship 2020, in Walkerton.

A quartet of graduating seniors could not have been more grateful, as the team exited the event with silver medals in hand.

With play wrapping up late Wednesday at the tournament, teams found themselves less than 48 hours away from the repercussions of COVID-19. It's quite likely that the trio of girls volleyball provincials, and an equal number of boys basketball playdowns, will effectively mark the end of the 2019-2020 calendar of OFSAA championships.

If that is the case, the CND ladies will cherish these moments even more so than was the case as a core group of four grade 12 athletes, some of whom have played together on the senior team at Notre-Dame since grade nine, prepared to leave for Walkerton, with their teammates, last Sunday morning.

"What we really tried doing this year was to be more together as a team," stated 17-year-old left side Brielle Chicoine. "We're such a family, this year, whereas last year, we were more individual."

"We have long pre-game rituals, where we stay really close together, and it builds good team chemistry."

The SDSSAA finalists kept right on rolling in quarter-final action, upending the Valley Heights Bears from Walsingham, 25-17, 25-8, 25-16. "For our four seniors, it's our last year, so we wanted to go out there swinging, leaving everything out there and making sure that we don't have any regrets on the way home," said Brielle Chicoine, who joins Emma Bissonnette, Emma Lapointe and Katia Legros in the group of graduating athletes.

"This year, when push comes to shove, we push," added Bissonnette. "We do not give up. After the city final loss, we knew that we wanted to fight back and get to OFSAA."

There is, after all, a somewhat different emotion at play, as athletes near the very end of their high school athletic careers. "I'm someone who is very competitive anyway, so I always play like it's my last game," said Bissonnette.

"But for sure, this year, I knew that it was my last year and I definitely did not want to just give up on it."

A club volleyball player until she reached grade ten, Bissonnette had drifted from setter to middle then right-side during her time with the Northern Chill. At Notre-Dame, however, she found a new home.

"Denny (Chicoine) decided to put me in the libero position, and I feel safe to say that it's my favourite position yet," she said. "I love the whole strategy of it, the whole defensive aspect, running for the ball, diving for the ball."

"For positioning, I am reading the opponent's shoulder," added Bissonnette. "If I'm not correctly place, according to the block, I am completely missing that ball and diving the wrong way - and it's happened a few times."

Byfield named 2019-20 Wolves MVP as team caps off shortened season
Mar 28, 2020 12:00 PM
Comments
We welcome your feedback and encourage you to share your thoughts on this story. We ask that you be respectful of others and their points of view, refrain from personal attacks and stay on topic. To learn about our commenting policies and how we moderate, please read our Community Guidelines.