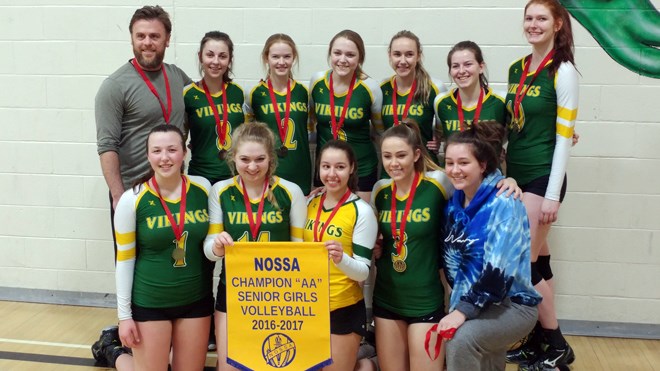 The Lockerby Vikings were defeated in the consolation final of the 2017 OFSAA "AA" Girls Volleyball Championship in Belleville last week. The team looks poised to make another run at a provincial banner next year. File photo

A loss in the consolation final of the 2017 OFSAA "AA" Girls Volleyball Championship in Belleville last week proved disapointing for the Lockerby Vikings.

But head coach Stephen Beausoleil had no trouble at all finding a silver lining. Graduating only Taylor Wilkinson from a team that has gone toe-to-toe with the Confederation Chargers for city supremacy these past two years, Beausoleil can hardly wait to begin the 2017-2018 campaign.

"I'm very proud of them," said the long-time Lockerby coach shortly after the four-set loss last week. "They've grown so much in the past month. I'm excited to see how good they will be next year."

Pitted against the College Avenue Knights from Woodstock in the final, Lockerby eventually succumbed 25-19, 18-25, 17-25, 23-25. The championship side of the bracket would see medals awarded to the Corpus Christi Longhorns (gold) from Burlington, the Riverside Rebels (silver) from Windsor and the St Mary's Crusaders (bronze) from Hamilton.

Both Riverside and St Mary's played out of the same pool as the Lockerby Vikings, with the NOSSA champions taking the Crusaders to a third and deciding set in round robin play.