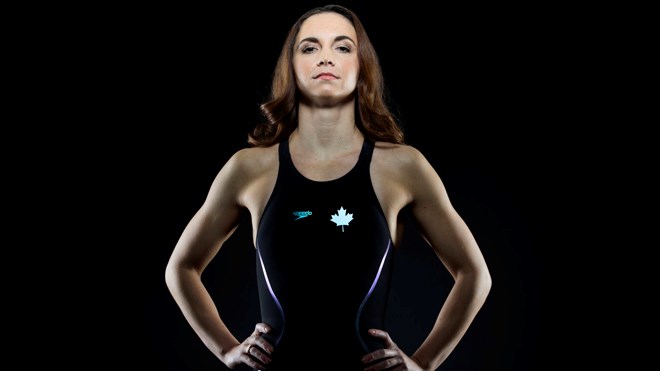 Sudbury has, over the years, produced its fair share of elite swimmers, more than capable of holding their own on the national stage, and occasionally beyond.

Other than the great Alex Baumann, double gold medal winner at the 1984 Olympics in Los Angeles, it is unlikely few have rivalled the impressive resume of Audrey Lacroix.

The 32-year-old veteran of the national team was in Sudbury over the weekend, working a 2016 Futures Stars Camp with a core of folks involved with the Nickel City Aquatics.

This, only weeks after qualifying for her third set of Olympic Games, as she will once again represent Canada in the 200m butterfly in Rio de Janeiro, Brazil.

"I had a "no regrets" kind of a mindset, believing that I had done everything I could to be successful," said Lacroix, while taking a lunch break from a very busy weekend schedule at the Gatchell Pool.

"I was really at peace with whatever would have happened in that race."

Competing in her first World Championships in 2001, and capturing gold and silver medals two years later at the Pan American Games, Lacroix easily boasts the most experience of any Canadian swimmer participating in the Games of the XXXI Olympiad this August.

"I think my longevity is due to the passion I have for the sport, and always being a student of the sport, trying to learn as much as possible," she said.

Given the hours she has spent in the pool, it was perhaps of little surprise that her primary goal, with the young swimmers at her disposal, was aimed largely at the mental challenges of the sport.

"The main thing is to give them the experience of a fun weekend of swimming," ssaid Lacroix.
"Hopefully they get some technical stuff out of it, things they can incorporate in their training, but the main thing is to keep them motivated."

And while the bulk of her teachings were aimed at the kids, the gold medal winner from the 2015 Pan American Games in Toronto did take time to share some valuable advice for the parents, as well.

"The main thing for parents is to listen to what their kids want," Lacroix stated emphatically. "That's what my parents did for me. They never planned to raise an Olympian. They happened to have a child with special talent, special abilities, and they made sure I had a chance to develop them."

The Olympics might be a faraway dream for the likes of 12 year-old Tristen Aikia-Lauzon, as she targets shorter term goals at the moment. "I'm turning thirteen this summer," she said. "I would like to get the "C" time for the 200m breaststroke, and I'm only one second off of it."

For camp weekend, however, the veteran of three years of swimming experience was approaching her time with Lacroix with a more general objective. "I just want to try and improve my swimming," she said.

"I've been working on my kicking. I have a hard time doing my kicking constantly. I tend to just use my arms."

The swimmers in attendance will now get to put their newfound knowledge to the test, as the Nickel City Aquatics prepare to attend the Swim Ontario Division III team Championships in Markham, ironically at the very same facility where Lacroix enjoyed her most recent international success last summer.