One win, one loss in back-to-back Wolves action 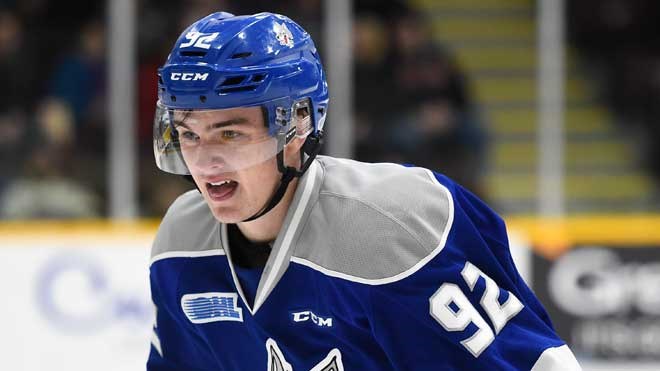 Sudbury Wolves' Blake Murray scores three goals in Thursday's game against the Barrie Colts, one in Friday's against the Soo Greyhounds. (File)

The Sudbury Wolves were pushed from the win column Friday just as eagerly as they jumped on Thursday, earning one victory, one defeat in their latest back-to-back performance.

Nickel City kicked off the week in Barrie, with one final matchup against the Barrie Colts, where they earned the last of eight-straight victories with an 8-3 final.

The pack returned home Friday to host the Soo Greyhounds, hoping for a similar fate but ended up suffering a disappointing 7-3 loss at Sudbury Arena.

Murray opened up Thursday's game with his 31st goal of the season 4:40 into play, assisted by Quinton Byfield and David Levin. But the Colts were trotting closely behind.

Barrie's Tyson Foerster and Brandt Clark scored one goal each that period, giving the Colts a one-point lead moving into second.

Shots on goal were 11-9 in favour of Sudbury after the first 20 minutes.

The Wolves found their stride in the second period, earning game advantage with a four-point run which ultimately carried them to the final.

Murray got the ball rolling with his second of the evening 6:43 into the period, followed by Owen Robinson and Nolan Hutcheson, but the boys in blue weren't done there.

Rookie Nathan Ribau closed off the run with the first goal of his OHL career 12 minutes in, assisted by Chase Stillman and Brad Chenier.

Foerster delivered one more point for Barrie that period, assisted by Nathan Allensen and Evan Vierling, cutting their deficit ever so slightly.

The teams moved into the final frame with the scoreboard stacked 5-3 in Sudbury's favour, outshooting their hosts 17-15 that period.

Sudbury was the only team to score in the third period, cementing their victory with three-goals late in the game on Barrie's empty net.

Murray kicked things off with his third goal of the evening 18 minutes into the period, before returning a minute later to assist Levin in his 27th of the season.

The last goal of the evening was scored by Hutcheson with seven seconds in play, assisted by Stillman and Landon McCullum, capping the match at an 8-3 final.

Sudbury outshot their hosts 13-4 in the third period and 41-28 overall.

Friday's game was a much different story.

The Greyhounds broke open the scoreboard with two nearly back-to-back goals by Jaromir Pytlik and teammate Rory Kerins a little over 12 minutes into play Friday.

Macauley Carson responded on behalf of the wolfpack a minute later, assisted by Chenier, closing out the period with a one-point deficit.

Sudbury Wolves' Murray and Soo's Cole MacKay scored one goal each in the middle frame, maintaining the Greyhounds lead heading into the final frame. Sudbury led in shots on goal that period 19-13.

The Greyhounds secured their victory with four goals in the third period, starting with the game-winning goal by Alex Johnston 1:40 into play.

Chenier broke up this action with Sudbury's last goal of the evening three minutes in, but the Greyhounds were just getting started.

Tanner Dickinson, Zack Trott and Joe Carroll delivered three more goals for the Soo over the 20-minute affair, ending the match with a 7-3 final in their favour.

Sudbury Wolves' Chenier was named the third star in Friday's game as well, topped by Soo's Calisti and Dickinson.

Sudbury sits first in the first in the Central Division, second in the Eastern Conference and fourth overall, with a record of 33 victories 27 defeats.

The pack host the Kingston Frotenacs for their last of two regular-season matchups Sunday, hoping to settle the score following two-point defeat Nov. 22. Game time is 2:05 p.m. at Sudbury Arena.

Kingston is fifth in the East Division, eighth in the Eastern Conference and 18th overall, with a record of 19-37.