Patterson joins Stevens and the others at Mount Allison 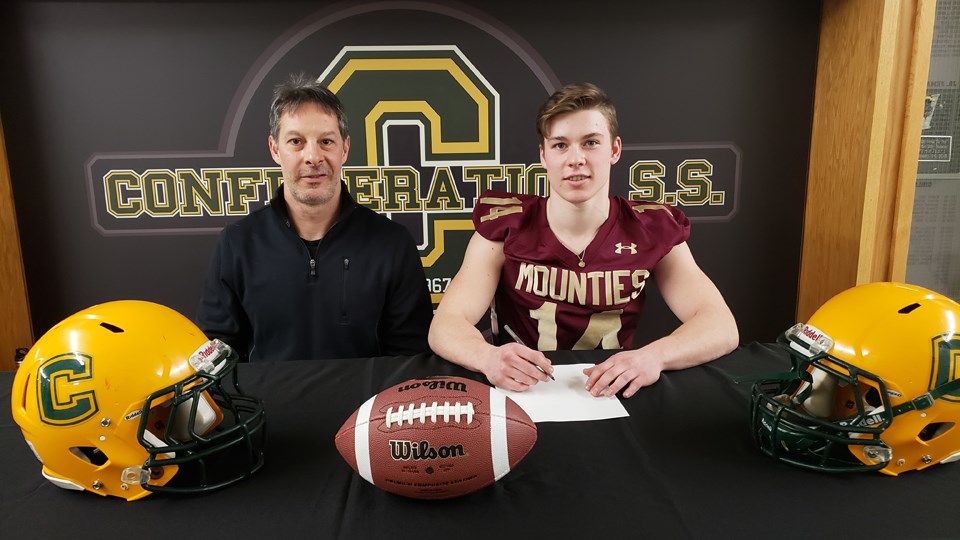 Confederation Secondary multi-positional talent Brad Patterson will be joining the Mount Allison Mounties in New Brunswick in the fall. (Supplied)

Pipeline might not be a popular word, right at this moment, but that is exactly how the football folks in Sudbury feel about their current connection with the Mount Allison Mounties.

With two players already on the roster of the university varsity team in Sackville, NB, and two more coming their way courtesy of the St. Benedict Bears program - Adam Rocha/Elliot Robinson - the potential total of Sudburians that could be in uniform next fall was recently bumped to five.

Much of this can be traced back to the success that high-school Most Outstanding Player recipient Graeme Stevens has enjoyed in his three years, to date, spent at Mount Allison.

Averaging 22.5 tackles, per year, over the course of the last two seasons, and adding three interceptions to his resume in 2019, the 200-pound linebacker has clearly helped open some doors for others in this area.

"Graeme was one of the first people to message me, telling me how much he liked the program there," said Patterson, who plans to study Business Administration. "I was super excited, early this football season, to get enough tape to maybe talk to their coaches. I was super thankful for guys like Graeme and others that are playing there to tell me about their experience."

Patterson's skill set, however, will hopefully create an entirely different experience than the one enjoyed by the graduate of Lo-Ellen Park Secondary School, who has always excelled on defence.

"I've always really liked being a receiver, catching the ball and making the big plays on offense," said Patterson. "That's just kind of my personality. That said, I am very comfortable playing many different positions. Anywhere they need me to play, I'll be happy to help out."

His ability to shine, on a local stage, has almost always been tied to his elusiveness, his shiftiness, that knack for making tacklers miss in the open field. Good thing, given that Patterson is not likely to blow you away with his physicality.

"I think a lot of people look at me and see that I'm only 5'11" and I don't weigh that much - but I think I can make up for it with my athleticism," he said. "I have shown on the football field that I have the ability to jump over taller DBs (defensive backs) and make the plays that I need to make in order to play football."

His long-time coach sees even more than that.

"His work ethic, both on and off the field, in the weight room, in the classroom, is exceptional," said Brandon Dougan. "You can tell that he's serious about what he wants to do. On the football field, he's got some special talent that you need to make it at the next level."

Lining up his prized athlete at quarterback, running back, slot back and wide receiver, not to mention his defensive and special team assignments while the pair teamed up with the Chargers, Dougan is confident that Patterson will have something a little extra going his way when training camp opens at Mount Allison in August.

"It's going to be great for him that he has that versatility at tryouts," said his coach. "He's done punt return, he's done kick return. He is going to excel at slotback. They are going to see that this kid has some serious athletic ability and knows how to play multiple positions."

Rounding out the five SDSSAA athletes with current connections to the Mounties is linebacker Ben Campbell, who appeared in eight games in his rookie season in 2019, registering a total of 3.5 tackles in limited playing time in year one.