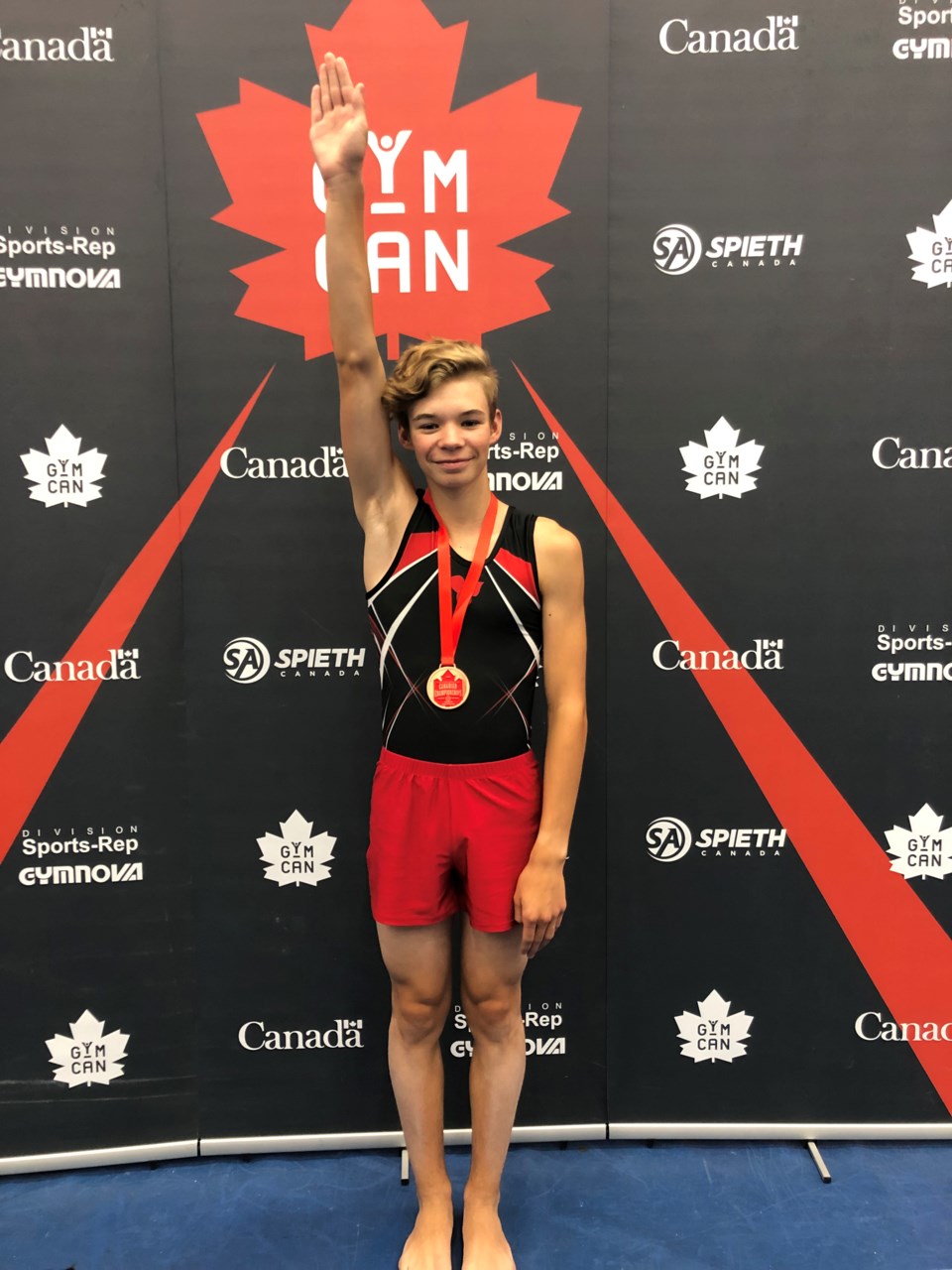 Sudbury Laurels' tumbler Connor MacDonald had a strong showing at the national level, grabbing a bronze medal for his individual performance, and a gold in the team event. (Supplied)

That will happen when the highlight meet of your season comes in the final event of the year. The off-season builds with excitement when that same meet is your first ever appearance at nationals, as was the case for MacDonald earlier this summer, in Oshawa.

With injuries rearing their ugly head, from time to time this winter, 2018-2019 did not go exactly as planned for the grade 10 student at Collège Notre-Dame.

Any frustration that MacDonald may have felt dissipated quickly, over the span of four very memorable days, to be exact. Even the lead-in to the competition was encouraging.

"A few weeks before nationals, my back was really sore," recalled MacDonald. "I really didn't think I was ready. But we saw my chiropractor, and she's done wonders. As the event got closer, my back felt better, I trained harder."

Still, goal setting was kept to a minimum, with the Sudbury Laurels' tumbler looking to perhaps crack the top five in his Level 5 grouping. Truthfully, he just hoping to learn, above all else, from his first visit to the electrically energetic atmosphere that are T & T (Trampoline & Tumbling) nationals.

So when his hand dropped, albeit momentarily, on his first pass in the preliminary round on Friday, MacDonald was not about to lose any sleep.

"It happens," he said. "I wasn't too worried about it. Hopefully, the second pass will be better."

That it was. There was just enough self-assuredness in pass number two, opening the door to a breakthrough for the local gymnast.

"I was struggling with the double tuck, because I wasn't setting enough, so that was my harder one."

Earning a score of 56.800 on his second pass, MacDonald found himself in third place, a ranking he would retain the next day in finals.

"I was super happy, it felt great to stick a pass at nationals," he said.

That, combined with a bronze medal performance, would have easily allowed MacDonald to return home, fully satisfied that his inaugural trip to nationals could be classified a success.

But there was still more to come.

"I knew there was an opportunity to go to Team Finals (on Sunday)," said MacDonald. While his slight miscue on opening day slotted the 14 year old Sudburian into second place within the Ontario Level 5 rankings, his provincial teammate would pass-up the opportunity, allowing MacDonald to compete alongside many of the very best tumblers in the country.

In the provincial team competition, each squad enters one member from their Level 5 bracket, as well as Level 6, Junior and Senior.

"It would mean I was tumbling four days in a row, so I wasn't completely sure, but I am so glad that I did it," he said.

"It's kind of a fun competition. We all kind of cheer each other on, we're all just proud to be there. The stands were full, everybody was cheering."

Not only did MacDonald and the Ontario crew earn gold, but the northern teen would garner a new wave of competitive wisdom, simply from observation alone.

"I saw a lot of people falling on some of the bigger skills, and it got me thinking about how down I get when I fall in training," he said. "Here these people are, falling in competition. Everybody falls - it happens. That was something that hit me."

It all adds up to one highly stoked young man, with the start of a new season only a month or so away.

"I am super excited for this year, just to see if I can get those new skills," he said. "I will use this year as a base and in years to come, just got for it."