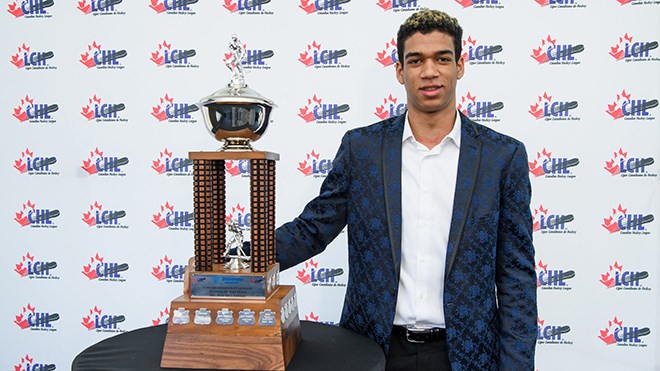 Sudbury Wolves centre Quinton Byfield is the second member of the team to win the Wawanesa CHL Rookie of the Year Award. (Vincent Ethier)

Sudbury Wolves centre Quinton Byfield has won the Wawanesa Rookie of the Year Award, the top honour for first-year players in the Canadian Hockey League.

The award caps an impressive regular season and post-season performance by the 16-year-old athlete from Newmarket. Maintaining a nearly point-per-game pace, Byfield delivered 29 goals and 32 assists across 64 appearances in the regular season, placing him third in scoring among OHL freshman.

In the post-season, Byfield racked up eight points in eight games, helping the Wolves win their first playoff series since 2013.

Byfield is the second member of the Sudbury Wolves to win the Wawanesa Rookie of the Year, following Benoit Pouliot in 2005. The last OHL athlete to win the award was Mississauga Steelheads’ Alexander Nylander in 2016.

Finalists this year included Brayden Tracey of the Moose Jaw Warriors and Jordan Spence of the Moncton Wildcats.