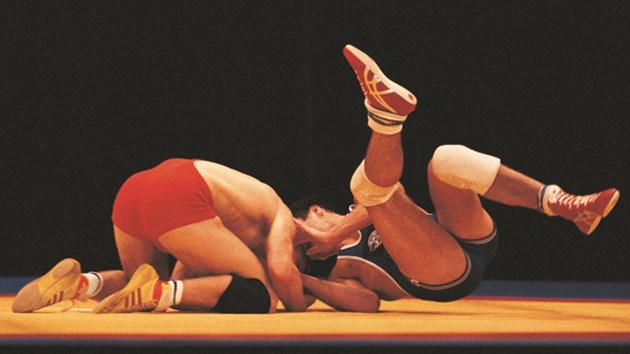 The Sacré Coeur Griffons reigned supreme at The Boot this year, cementing themselves as one of the top schools in the SDSSAA wrestling scene ahead of the city championships on Feb. 8. File photo.

Having passed the mid-season point that is marked by the annual tradition that is "The Boot," the SDSSAA wrestling scene is gaining some clarity, with city championships slated tentatively for Feb. 8.

Still, there are countless other very intriguing battles shaping up. Perhaps none moreso than the boys 89 kg grouping, where the the top two contenders - Justin Villeneuve of Macdonald-Cartier and Franck Shu-Atoh of Sacré-Coeur - renewed their back and forth rivalry.

Coming up just short in the last two battles, Villeneuve garnered bragging rights at "The Boot", recording a second round pin for the win.

"Every match is similar, we always have the same kind of style," said Villeneuve, looking to make a return trip to OFSAA in his grade 12 campaign.

"Me and Franck are both pretty equal, the same amount of muscle and technique at the same time. I've already lost twice to him this year, and it's all because of mess ups. Today, it so happened that he did a wrong move and I was able to catch him."

Returning to wrestling after being away from the sport in 2015-2016, Shu-Atoh shared the same mutual respect that is held by his 17 year old adversary, as he pondered his setback in perhaps the deepest of the Sudbury weight classes.

"I tried to put him down, but he's gotten stronger," said 16-year-old grade 11 student. "It's really tough. I have to think about what I have to do, when I am wrestling, but sometimes I just react."

That need to incorporate the practice teachings to the point where they become natural on the mat is one that virtually every athlete at the meet has faced, with a challenge, at some point in their wrestling career.

"When you're on the mat and you're wrestling some guy, there's a lot going on in your mind," said grade 12 Lasalle Secondary veteran Andrew Paris. "It's hard to work on the moves as your thinking about everything."

"In grade nine, I have to be honest, I could not even hear the coaches," Paris continued. "There's so much going on. But as you go through the years, you realize that what they are saying is actually very useful and could win you the match, so it's important to listen."

A NOSSA champion in both 2014 (44 kg) and 2015 (47.5 kg), Paris is looking forward to making a return visit to OFSAA. Moving up to the 54 kg division in order to find some competition locally, Paris would finish second to teammate Christian Yule.

Making a return to the mat for the first time as a high school student, Brooke Sagle of Lively has shown very little signs of rust, following up a first place finish at the 2016 Early Bird Meet last month with her win at "The Boot" in the 67.5 kg bracket.

"I used to wrestle when I was nine and ten, and just got back into it this year," said the 17-year-old grade 12 student. "I had a bad foot injury, so I could not do sports for a few years, and then my high school did not have a team."

But with Laurentian University wrestling team member Emily Morgan completing a teaching placement at the home of the Hawks, Sagle jumped aboard, after transferring from Lockerby Composite.

In her case at least, it really was as simple as riding a bike.

"The basics of just knowing where to be, that tends to really help me," she said. "It just comes natural to me. I need to work on knowing better moves and how to do them properly."

Following is a complete listing of the weight class champions at "The Boot", as the Sacré Coeur Griffons emerged as team champions: