Second round pick Ethan Larmand commits to the Wolves 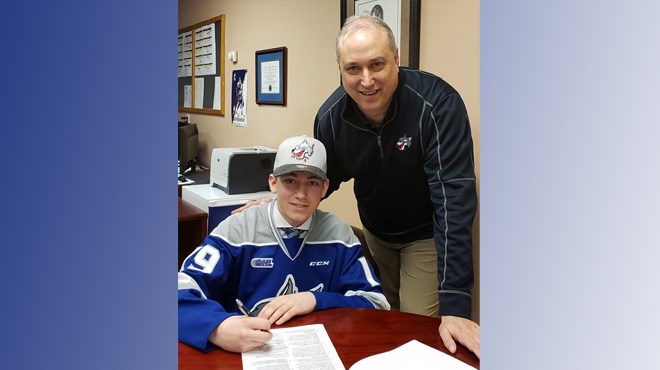 The Sudbury Wolves announced Tuesday that forward Ethan Larmand has committed to the hockey club. (Supplied)

The Sudbury Wolves announced Tuesday that forward Ethan Larmand has committed to the hockey club.

The Midland, ON native was selected in the second round with the 26th overall pick by the Wolves in the 2019 OHL Priority Selection. The 5-10 centre finished last season with the North Central Predators Minor Midget AAA where he led his team with 27 goals and 24 assists in 34 games, good for fifth in league scoring.

“I am very honoured and excited to be joining the Sudbury Wolves,” said Larmand. “Thank you to Mr. Zulich, Mr. Papineau and Coach Stillman for selecting me. I look forward to getting to know the rest of the staff, team, and the fans. I have heard that Sudbury is a great hockey city and I hope to help bring them a Memorial Cup!”

Larmand was consistently labelled as one of the top draft eligible prospects all season. Selected as one of 11 forwards to represent Team Ontario at the 2019 Canada Winter Games in Red Deer, AB, Ethan posted a goal and an assist to help fuel Team Ontario to a silver medal.

Larmand also represented Team OMHA White at the OHL Gold Cup, where he led the team in scoring with five points in four games.

"We are thrilled that Ethan has committed to the Sudbury Wolves,” said General Manager and VP of Hockey Operations Rob Papineau.

“He had a tremendous season with North Central, leading his team in points and was a leader in their dressing room. He is a very respectful and very focused young man with a tremendous work ethic that we are excited to add to our program."

Fans can run with the pack all season long. Season tickets are available at Sudburywolves.com.