Sudbury's young athletes reflect on their experience, the challenges they faced and what they learned
Apr 7, 2019 1:00 PM By: Randy Pascal 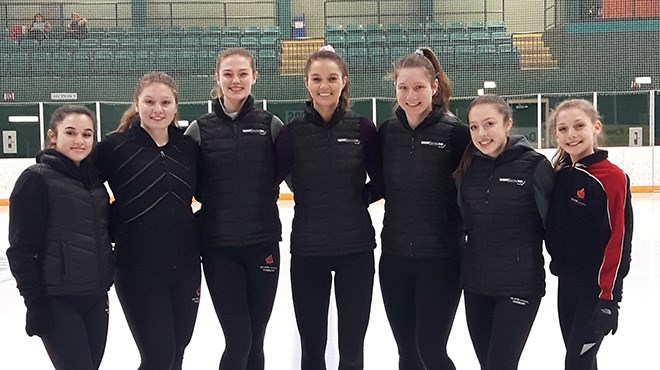 The Star stream pathway might not be cast in stone for years to come, but there is little doubt that the recent Skate Ontario initiatives created a more challenging journey for local figure skating talent.

Still, they persevered, with no less than eight athletes representing the Sudbury Skating Club competing last month in Mississauga.

"It was more of a learning experience year for me, because I was recovering from an injury last summer," acknowledged 15 year old Breanna Boisvenue, a grade 10 student at Lockerby Composite , who finished 10th in a field of 18 skaters in the Star 10 Women Division.

After entering pre-novice events in the past, Boisvenue settled into the Star skate stream, hoping to enjoy something of a reset on a competitive career that first started at the age of nine. "I think it helped," she said.

"It motivated me more, put me in a better mental state because it was building back my confidence, giving me something to work towards. There are still girls in c that are still extremely talented."

"It's been a rough season for me, generally, but at provincials, I would say that I skated the best I had all season," Boisvenue added. "I had to get all of my levels on my spins, because my spins were kind of slacking a little. It was a struggle, all season, on my spins, trying to make sure I was getting as many marks as possible."

"I was a little disappointed, because there were some mistakes, here and there, but I'm just proud that I was able to go and get the experience."

Same for clubmate Gillian Dwyer, a Star 5 - Women (O13) skater who was making her first appearance at the Skate Ontario Provincial Championships.

Her season, however, was more of a test of patience, having posted an excellent score in a competition last summer, but competing in a system that brings together the top 18 in each category, from across Ontario, through a series of qualifying events that will run right through to just a week or two before provincials.

"When I started the season, I was pretty sure I could qualify, because I was fourth in the rankings to start off," explained Dwyer. "But then it was a matter of waiting to see who would do better. I had to wait for other girls to compete to see if their scores would beat mine."

"It was really difficult and stressful for me to think about either getting in or not getting in, because I was kind of right on the line of getting in." A topsy-turvy season did not help, one in which a great start gave way to some lack of consistency, all while dealing with the likelihood of attempting to better her summer success.

"I was kind of off and on throughout the whole season with my jumps, trying to land things," said Dwyer. "But I had a really good skate in the summer, so I was kind of glad that I set my standards high and tried to beat it every time."

In the end, sneaking in right near the bottom of the 24-skater field, Dwyer would improve her ranking a full eight spots in Mississauga, a definite feather in the cap of this first-time entry.

"When I got there, I ended up doing better than I thought," she said.

"I kind of had a mindset that I knew that I could do everything and just needed to bring it out when I needed it the most."

Additionally, a little mid-season juggling of her routine worked out in concert with her coach, also proved beneficial come time for provincials.

"One of the jumps that I had early in the program, we moved to later in the program, and we put my stronger jumps first," said Dwyer. "That way, the early part of my program was strong and building, and the jumps I was struggling with, we moved them around so I would feel more comfortable. I think that helped me to a good skate."

Seventeen year-old Collège Notre-Dame senior Hannah Bodson almost completely avoided the stress that Dwyer endured, nailing her qualifying score quite late in the year while taking part in a February meet in Keswick.

Dealing with some illness in the weeks leading up to the event, Bodson opted to rest for six to seven days, yet another strategy that ultimately paid dividends, albeit quite unexpectedly.

"I was shocked that I was able to pull out everything," said Bodson. "I had a hard time doing my spins before and there, I was able to do them. We're thinking that the week off helped me to relax a little before the competition."

Even the venue itself seemed to stack the odds against the local product with only weeks remaining to try and qualify for provincials.

"I felt kind of awkward, without the glass, not knowing where I was after a spin. But I knew that I had to keep my mind on it, to be able to skate well and do my program and know where I am on the ice."

Finishing Grade 12 at CND this June and heading to Collège Boréal in the fall, Bodson has decided where skating might still fit in to the equation for 2019-2020.

"I don't know if I would continue to do adult competitions, but I already have my certification to become a coach, so I'm going to hopefully start coaching and will still be on the ice," she said. "It's what I love to do."

Bodson and the others will enjoy one more opportunity to compete, locally, this spring, with the Let's Skate 2019 Performance Event set for April 12-14 at the Gerry McCrory Countryside Sports Complex.

Joining the above trio in competing at provincials were Mikayla Fabbro, Madeline Baron, Mackenzie Anderson, Abby O'Bonsawin and Megan Howell.