It’s been quite a year already for local curlers. With the likes of the Kendra Lilly and Tracy Horgan rinks preparing for national championships, the road has been paved.
Feb 1, 2012 8:11 PM By: Randy Pascal 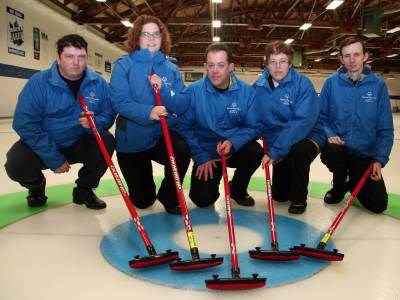 It’s been quite a year already for local curlers. With the likes of the Kendra Lilly and Tracy Horgan rinks preparing for national championships, the road has been paved.

It’s a path that Paul Logan, Jason Blais, Kenny Beauvais, Tricia Leonard and Odette St. Gelais are following. The five local athletes will head west in late February as one of two Ontario teams, which will compete at the 2012 Special Olympics Canada Winter Games in St. Albert, Alta.

“Last year in Thunder Bay, we lost in the finals (6-4), but qualified for the Winter Games at that time,” Beauvais said. “That was probably our best event.”

In a decade or so of regional competitions with other Special Olympic athletes, the Sudbury squad have tasted defeat only a handful of times, though the upcoming Winter Games represents their first breakthrough at that level.

At the age of 43, Logan serves as team skip, with a dozen years of curling experience to draw on. “I have to call the shots and know where to put the broom,” he said before practice Monday afternoon. “I like a lot of rocks in play, with guards out front and some rocks in the house.”

The team’s notable improvement over the years should hardly come as a surprise, given some of the local curling mentorship the group is receiving. A member of the Canadian Olympic hockey team in 1956 in Cortina d’Ampezzo (Italy), Jim Logan (Paul’s father) first became involved with Special Olympics athletes roughly a decade ago, despite no experience with the sport of curling.

“The first year Paul started curling, the coach quit and they had no one else to take over,” Logan said. “Fortunately, Louise (his daughter) and my son-in-law Lee (Toner) are both avid curlers, so I said I would take over as general manager and they could teach the curling.”

The arrangemente seems to be working, as each cog in this curling wheel fulfills their assigned role.
“I have heavy hitting capabilities — they keep me for that purpose,” Blais, the team’s vice, said.
Blais has travelled to a national championship once before as a swimmer but said he wanted to try something different. “It’s one of those sports that I liked as soon as I started playing.”

At second, Beauvais knows that he is counted on often to move the rocks those few critical feet. “It’s good to know when to sweep and when not to sweep.”

Despite his role as skip, Logan is likely the most quiet of the group, according to Beauvais, seldom screaming out instructions that would echo throughout the rink.

With a decade of curling background under his belt, Beauvais said he is anxious for the challenge that awaits he and his mates.

“We play the same teams every year and in 10 years, we’ve probably only lost three games,” he said. “It will be good to have more competition.”

Sharing the role of lead, Leonard and St. Gelais set the tone for each and every end, giving the rest of the team something to work with.

“I’m supposed to put my rocks not on the circle, just in front of the house, but sometimes it happens that they go in the house,” St. Gelais said.

At 50 years of age, St. Gelais is not only the elder statesman of the group, but also the most experienced curler, having first taken up the sport from 1990 through to 2003 as a member at the Falconbridge Curling Club.

Still, she acknowledged there is more to learn. “This year, I’ve started watching curling on TV more. It helps to teach me how to do my turns better.”

For Leonard, this championship will be extra special as she dedicates her competition to her mother, who recently passed away. “Curling is in my family genes. My dad used to curl, and my mom and my aunt.”