Sudburian answers the calling of Kilimanjaro

Throughout her years at St. Benedict Catholic Secondary School, Joanna Fabris participated, quite eagerly, in just about every sport imaginable. There was seldom a challenge that she would side-step.
Sep 26, 2012 3:19 PM By: Randy Pascal 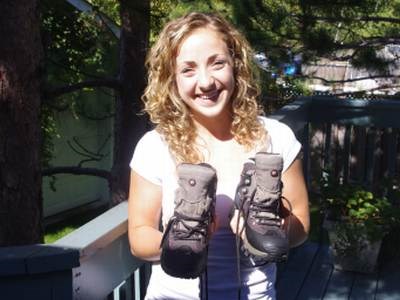 St. Benedict grad Joanna Fabris is preparing to climb Mount Kilimanjaro as part of a fundraising expedition in support of Roger’s House in Ottawa. Photo by Randy Pascal.

Throughout her years at St. Benedict Catholic Secondary School, Joanna Fabris participated, quite eagerly, in just about every sport imaginable.

There was seldom a challenge that she would side-step. Perhaps that is why few are surprised in finding out where Fabris has found her latest calling.

A recent graduate of the Health Sciences program at the University of Ottawa, the 22-year-old Sudbury native is preparing to climb Mount Kilimanjaro in October, as part of a 10-person fundraising expedition that was organized in support of Roger’s House in Ottawa.

When a bevy of injuries sidetracked her aspirations to continue playing volleyball at a post-secondary level a few years back, Fabris quickly immersed herself in a long-time passion, working closely with children.

Blessed with some experience assisting handicapped youth, Fabris took on the daunting task of volunteering at Roger’s House, a pediatric palliative care hospice.

“It’s surprising, because everybody there is so upbeat and happy, it really leaves you with a feeling that you’re doing something good,” Fabris said.

Generally entrusted with playing with the children, doing “whatever the kids would really like to do,” Fabris jumped at the chance to give back even more.

“I was forwarded an email through our co-ordinator of volunteers about two parents that are organizing the climb,” she said. “I read the email and was instantaneously interested.”

The initiative was brought forward by two former Roger’s House clients, who had each lost a son. The pair, who are avid outdoor enthusiasts, met through the Roger’s House bereavement group.

“One of the most motivating things was the fact that these two people, who had lost a child, found a way to give something back, even though they had lost so much. Just volunteering at Roger’s House, I’m amazed at how incredible all the parents and the families have been.”

Heart-felt emotions aside, there was a pragmatic reality to taking on the challenge of ascending Kilimanjaro, the highest mountain in Africa at nearly 20,000 feet above sea level.

“My only real concern was finding a way to pay for my trip, given that all the fundraising we do goes entirely to Roger’s House,” she explained.

But full-time work on a local level, all while still pursuing her hopes of attending medical school, provided the financial safety net to see the expedition through.

While athletic and very active by nature, Fabris has no serious climbing experience. For technical advice, she turned to long-time family friend, Brian Ramakko.

“He has climbed Kilimanjaro before,” Fabris said. “Having him being able to tell me what to expect was extremely helpful — and then of course helping me out with all of the gear.”

As this life experience draws nearer, the nervous energy increases for the young lady.

“It’s apparently pretty amazing being above the clouds, the views that you get,” she said. “The more I was finding out about the mountain, the four different climbing zones, the more interested I became.”

Second thoughts? Fabris has few. “I might not have necessarily known what I was getting myself into, at the beginning, but I love those kinds of situations.”