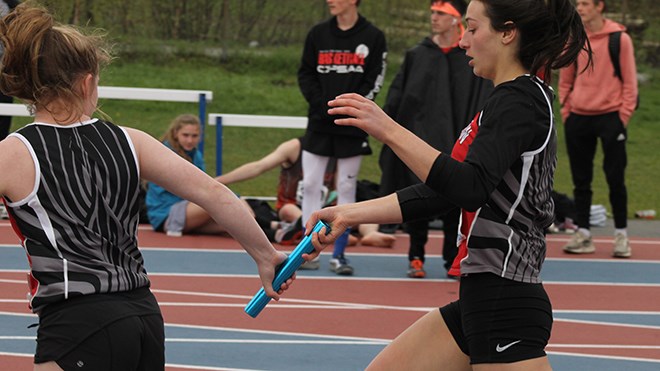 In the eyes of Macdonald-Cartier Panthères senior Ariane Saumure, the finish line is/was directly in sight, both literally and figuratively.

"It's definitely sad," said Saumure, after a double gold medal performance (200m dash and the long jump). "It's kind of the end of an era, for me, with my high-school sports. I feel like I wanted to try and just leave it all out there, because it is my last time."

A multi-sport athlete, who was also a member of the city champion girls basketball team which went on to claim bronze at OFSAA, Saumure will head off to join the Western University Mustangs in the fall, not wavering in the least, despite the recent dismissal of long-time Western basketball coach Brian Cheng.

"Coach Brian was one of the big reasons I chose Western," suggested Saumure. "He was always caring, he went the extra mile to make sure I would feel comfortable, he came on the campus tours with me and all that."

"But at the end of the day, I picked it for the school. I subtracted basketball out of the equation, because you are there, after all, for your schooling."

If Saumure and many other fourth/fifth year competitors were feeling a tad nostalgic, the same could not be said for the majority of the record setting athletes, including a pair that entered the historic books twice in the past two days.

Logan Spicer navigated his way through a very interesting day, enduring a tough morning schedule that would give way to a memorable few hours in the afternoon. "I definitely wasn't feeling the best coming in," said the 16 year old grade 10 student at Lo-Ellen Park, minutes after propelling the junior boys high jump mark from 1.88m (Noah LaPierre - 2014) all the way up to 1.92 metres.

"I ran a season worst 100m just before this and I was pretty cold. It's been a chilly day, full of rain. But as I got jumping, I got more and more warm, and I felt better as the competition went on."

Combine that with a closer adherance to the key technical facets of his jump, and Spicer was off to the races. "I have a bad habit of lowering my bum a little bit early in my jumps," he said. "At the lower heights, I can get away with that, it's not a big deal."

"But at the higher heights, if that happens, I'm knocking the bar almost every time, so I have to really focus on contracting my core." Suddenly invigorated by his success in the high jump, Spicer was out on the track, an hour or so later, for the junior boys 100m final.

After running a 12.07 in the morning heats, Spicer blazed across the line when it counted in 11.45 seconds, enough to barely edge out Devon Savignac of St Charles (11.50), but also enough to tie the record held by Nic Topps of Lo-Ellen (2008).

Exactly where the bar will eventually settle for ultra-talented Lo-Ellen Park thrower Lauren Fearn remains to be seen. Last June, she captured a bronze medal in the discus, despite having been introduced to the event less than a month earlier, and only a week or so prior to the city championships.

On Wednesday, Fearn would establish a new record in the junior girls shot put, advancing the line from 11.00 metres to 11.81 metres. Twenty four hours later, she obliterated a discus mark.

Her heave of 37.02m was 7.79 metres further than the old record, or more than 25% beyond that of any other junior girl, in Sudbury, in the past 15 years. Based solely on the 2018 OFSAA results, this would have placed Fearn behind only junior gold medal winner Hanna Van Stuyvenberg (40.24m), the champion's toss already almost six full metres ahead of last year's silver medal winner.

"I just want to do my best, but since I really don't know what my best can be, that really helps," deadpanned Fearn. "I don't really set too many expectations. I like to PB, I want to aim for a PB, but I can't get too upset."

Not with the way things turned out in the discus, for sure. "On Monday, at practice, I was throwing really well - 35, 36 metres - and I was super happy with that. I have never broken past 36, until today, so 37 was awesome."

Lo-Ellen junior hurlder Bryce Desabrais has not broken any records, at least not yet. Just don't put it past the 15 year old, who in just his second year in the discipline, walked off with both the 100m hurdles (16.08) and 300m hurdles (44.95) titles.

"I started in grade nine," said Desabrais. "At first, I wasn't that great, but I've improved a lot. I am more of a 100m hurdler, but I thought I would try the 300m. It went well, obviously." In fact, racing the distance for just the second time in his career, Desabrais came within a few seconds of challenging the record.

It's been quite a ride for the well-spoken young man, these past two years. "I sprinted in elementary track, but I wasn't that great," said Desabrais. "I never even thought I was going to do track in grade nine. Some of my friends got me to do this and I'm really glad that they did."

"I'm pretty flexible and you need to be nice and flexible to really flick your leg over the hurdle. That helped me a lot. I'm not the fastest sprinter, so I'm always working on my form."

Rounding out the list of day two record setters was Kalila Bachiu (Lo-Ellen - JG), who shaved roughly a half second off the mark held by Haley Maziarski (LOE) in the 1500m event, lowering the standard from 5:08.87 to 5:08.45.

Bachiu, Fearn and Spicer were also among the list of individuals who would earn divisional aggregate championships, with full results as follows: