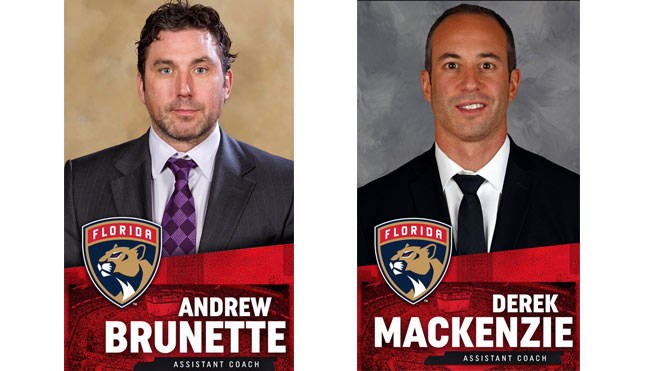 Sudbury natives and retired NHLers Derek MacKenzie and Andrew Brunette have been hired as assistant coaches with the Florida Panthers. (Supplied)

Two Sudbury natives will be joining the staff of the new head coach of the Florida Panthers.

This week, the team announced Derek MacKenzie and Andrew Brunette will be assistants to Joel Quenneville when he takes the reins of the team this fall.

MacKenzie, 37, retired last season because of a shoulder injury, following a long career with the Atlanta Thrashers (now the Winnipeg Jets), Columbus Blue Jackets and the Panthers. He was team captain in Florida for two years, an acted as an unofficial assistant coach last year.

He was drafted by Atlanta in 1999, and played one more season with the Sudbury Wolves, in which he scored 40 goals and 89 points – good for sixth overall in the OHL. He was also known for his faceoff skills.

Brunette, 45, played with the Rayside-Balfour Canadians before being drafted by the OHL's Owen Sound Platers. He was drafted by the Washington Capitals in 1993, before being taken by the Nashville Predators in the 1998 expansion draft, scoring Nashville's first ever goal.