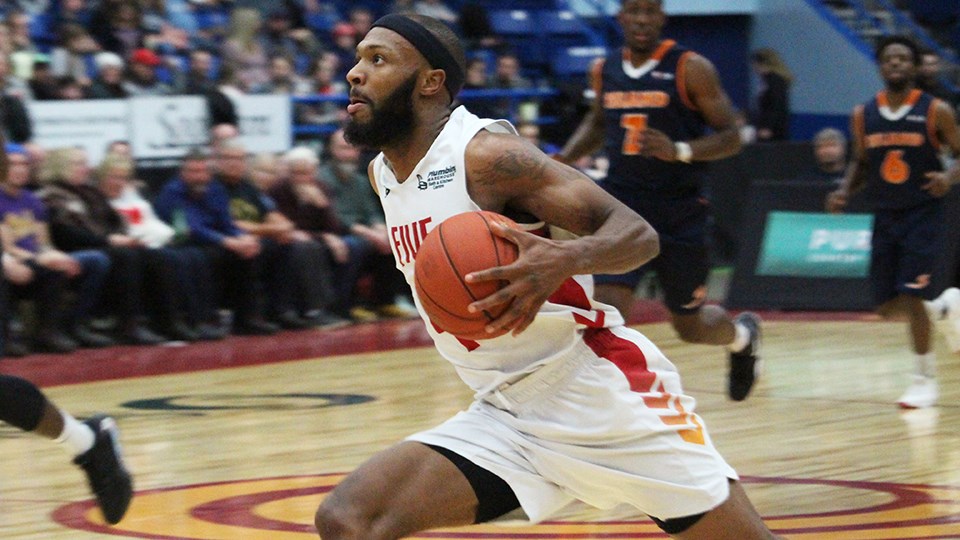 The Sudbury Five have added another victory to their scoresheet Monday (Feb. 17), less than one week after toppling the division-leading London Lightning from their nine-game streak.

This time Windsor played host, and boy, were they ready for a fight.

Sam Muldrow broke open the scoreboard for Windsor with a jump shot 45 seconds into play, kicking off an epic point-for-point performance by the two division rivals. Sudbury caught up with their hosts half-way through the quarter, finishing two points ahead with a score of 21-19.

Defence hunkered down in the second quarter, resulting in two nearly two-minute gaps in play with no points from either side of the court. But you can only hold down the Nickel City offence for so long.

Sudbury evened the score 10 minutes into play, sending another 29 points Windsor's way shortly thereafter. Faced with 27 in response, the Five moved into the second-half up by seven with a score of 53-46.

Windsor was first to the basket once again in the third quarter, but the Five were right on their heels. Just as it seemed the Nickel City with clinch another quarter, Windsor's Kemy Osse at 3:54 sunk three clean free throws, bumping the hosts ahead.

Express moved into the final quarter up by four, with a score of 82-78.

Dexter Williams Jr. opened up the quarter with a three-point jump shot 20 seconds into play, in what would prove to be Sudbury's most point-heavy quarter of the evening. Windsor kept the pace up until the final minute when a run by Sudbury gave them the last seven points needed to close the game in their favour.

The match was called at a 116-114 final for Sudbury, making this the Five's seventh victory in their last nine games.

Johnson topped all players in points with a total of 37, which included 12 field goals, six three-pointers and 16 rebounds. The 6-10 forward also used his reach to contribute five assists that evening and six steals, leading to four turnovers for the Nickel City.

Sudbury Five sits second in the Central Division behind the London Lightning, with a record of 10-6.

The team return home Wednesday to face the St. John's Edge for the first time in the 2019-20 regular season.

St. John's Edge is currently second in the Atlantic Division behind the Moncton Magic with a record of 8-6.