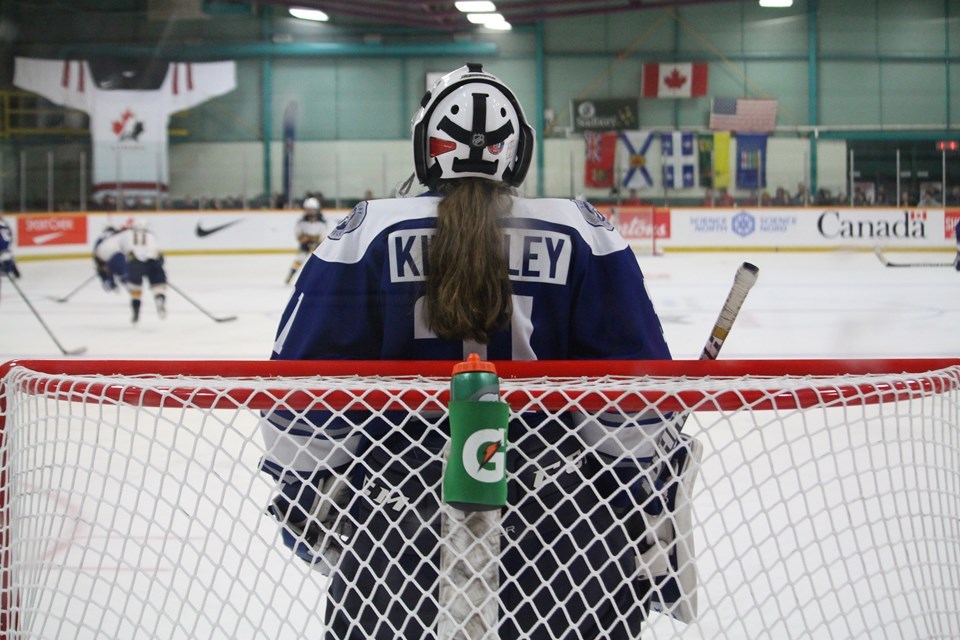 Last month in Calgary, some of the very best female goaltenders in the country gathered under the watchful eye of Hockey Canada staff. Sudbury netminder Mireille Kingsley was among them. (File)

Last month in Calgary, some of the very best female goaltenders in the country gathered under the watchful eye of Hockey Canada staff.

Sudbury netminder Mireille Kingsley was among them.

Already garnering plenty of attention over the past few years, earning the type of scrutiny that has translated into a scholarship offer with the Providence Friars of the NCAA, Kingsley showcased her skills this past April on the largest stage yet, helping to lead her Sudbury Lady Wolves team with a silver medal performance at the 2019 Esso Cup in Sudbury.

"There obviously is still stuff I need to work on, but overall, I was very happy," she said recently, preparing to head south, next month, completing her final year of midget hockey with the Mississauga Chiefs of the PWHL (Provincial Women's Hockey League).

"Even with the whole team, we played well. It was as awesome experience, with the home crowd and everything. When we're playing at the Esso Cup, I was not focusing on anything after. I was just focusing on the tournament itself, every game, every shot even."

That approach, combined with both a great deal of natural athleticism and a work ethic that draws the very best from her God-given abilities, allowed Kingsley to be included in a group of just nine U18 puckstoppers who would enjoy a four day stint in Alberta, with two other groupings on hand (in the form of elite U22 and national development team talent).

"We shared a dressing room with the other goalies, we would eat together," said Kingsley. "It was cool getting to talk to the older girls who had been there before, they've played university already."

This, however, was anything but a summer vacation. There was plenty to be squeezed into a very tight long weekend schedule.

"We were on the ice twice a day, and it was a lot of learning," said Kingsley. "We had a bunch of presentations throughout the day - a visual session with an eye doctor, some on fitness, but focused more on stretching and mobility, and a lot of goaltending technique.

"Learning all of these new things really opened my eyes about how much more I need to learn and practice to be where I want to be," added Kingsley. "We did a lot of post work, for instance, working on RVH, VH and overlap. I had actually never heard of overlap, had never used it, really didn't even know what it was."

Now, she gets to put into practice her new-found knowledge. And with the move to the PWHL, Kingsley will have the opportunity to test herself against the very best midget aged sharp-shooters in the province.

"I think with having the best girls in Ontario in this league and getting to chance to play against them, I'm really excited," she said.

Known in local circles in equal parts for her outstanding technical knowledge of the position and her core raw talent, Kingsley understands that there are times and places when both will be required.

"You can practice the same technique, over and over, but in the end, you have to stop the puck, so being able to react quickly is critical," said Kingsley.

In fact, over the course of the Calgary camp, Hockey Canada brainthrust explained that at the base of the pyramid that comprises elite hockey talent is a really good all-around athlete, with a middle layer that is devoted to fitness, and an upper tier that finally captures the pure hockey skills.

Somewhere in the mix, particularly for goaltenders, one needs to incorporate mental strength. Kingsley certainly has.

"Whether it's a goal or a save, I try and stay the same," she said. "When a goal goes in, it's obviously not fun and you're not happy, but I try and just reset. There's nothing I can do about it now, so just try and stop the next puck."
Do it over and over again, often enough, and people will notice.

Even some of the top hockey minds in the country, apparently, those folks who are just the latest group that the Mireille Kingsley has impressed.