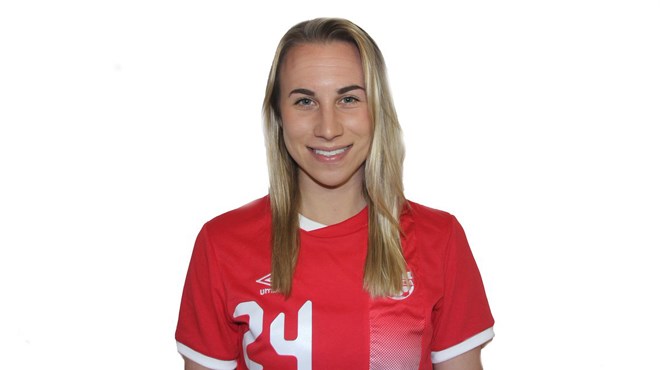 Jenna Hellstrom is a professional soccer player from Sudbury. (Supplied)

Jenna Hellstrom will readily acknowledge that there were times when she doubted as to whether the fight was worth the goal that was being pursued.

To suggest that the Sudbury native has been rewarded for her diligence, determination and resiliency might constitute the understatement of the year. The local product and graduate of both Carl Nesbitt Elementary School and Lasalle Secondary was named, just last week, to the 23-women roster that will represent Canada at the 2019 World Cup in France.

It's been quite the ride for the feisty part-time striker, part-time defender, who rewrote the record books over the course of an illustrious career with the Kent State Golden Flashes of the NCAA.

The program's all-time leader in 12 different career or single season categories, Hellstrom would become the first player ever with Kent State to be NSCAA All-American.

In 2017, Hellstrom would earn her first professional contract, in Sweden, with FC Rosengard, moving on throughout the Swedish league as a representative of Djurgardens IF, Vaxjo DFF and KIF Orebro.

Despite all of the upheaval on an international stage, the 24 year-old Sudbury sensation managed to catch the eye of the national team program, earning her first "cap" (game appearance as a member of Team Canada) in 2018 at a tournament in Portugal.

"It was a lot to take in at once, I didn't know how to feel," Hellstrom said last summer.

"I was just thinking don't mess up. When I have the ball, make simple decisions - and work hard, which is one of my biggest attributes. I think the game could have gone better, but it was my first cap. Now, it's off my shoulders."

Canada opens the 2019 World Cup on June 10, battling Cameroon, before facing New Zealand (June 15) and the Netherlands (June 20) to close out pool play.