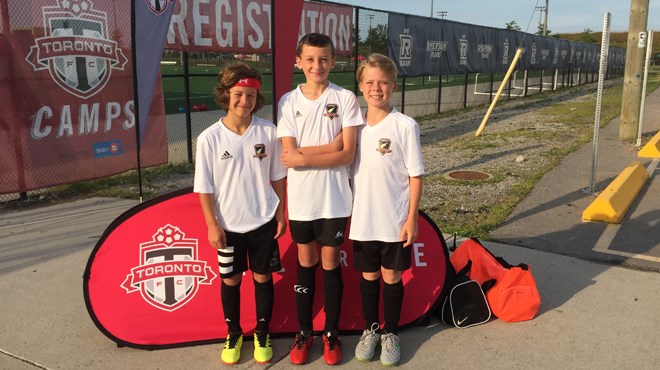 "They are trying to pick players for this super select group of players in Ontario," said Cusinato, a soon-to-be grade six student at Holy Cross Catholic Elementary School.

While all three of the locals are teammates on the 2019-2020 Sudbury Minor Peewee "AAA" Wolves team this winter, they also represent a varied cross-section of talent on the open field.

"I'm a good playmaker," said Cusinato. "I don't want to be mean, but I see things that other people can't really see. I can see that pass, and I know that I have to put this angle because that person is going to stay over there. I have pretty good accuracy on my shots and my passes."

Cusinato and the others were joined by some of the top ball handlers in Ontario, with all competitive clubs allowed to designate a trio of talent to take part in the two-day program designed to help incorporate pre-teen athletes into the pathway that eventually leads to the Toronto FC Academy.

It was a potentially intimidating environment, to be sure, for the kids representing northern Ontario hopes.

"There were some players there that the coaches already knew their names, but they pushed me to play harder, because they had amazing footwork, they were super fast, and they knew everything," said Cusinato.

"Some of the kids were doing some crazy 360's with the ball, and they had some crazy hard shots," said Wicklander, also in grade six but heading off to Holy Trinity Catholic Elementary School. "It was just wow. I just tried to take some deep breaths and just play my game."

Although he suspects his long-term potential on the ice exceeds his upper ceiling on the pitch, Wicklander does recognize that the two sports often complement one another quite well.

Of the three, Toffoli is arguably the most passionate about soccer, as the student-athlete from Ecole St-Denis earned a recall to the second phase of the talent I.D. journey this past week.

"I think I will be better at soccer when I'm older," he said, addressing the question of his long-term potential in both sports. "I've got good feet, a good shot, I'm good at passing. (GSSC) Coach Dino (Moretta) likes me as a center mid because I go up the field a lot, and I come back."

"And I'm good at defending," added Toffoli. "On defence, you don't want to let them get past you, you want to make them go to the outside. That's what I do."