Sudbury's Brad Chenier making the most of his opportunity with Battalion

'The coaching staff and the players playing with me, they really much put it on my plate for me, always setting me up with nice goals'
0
Jan 17, 2019 7:00 PM By: Matt Sookram 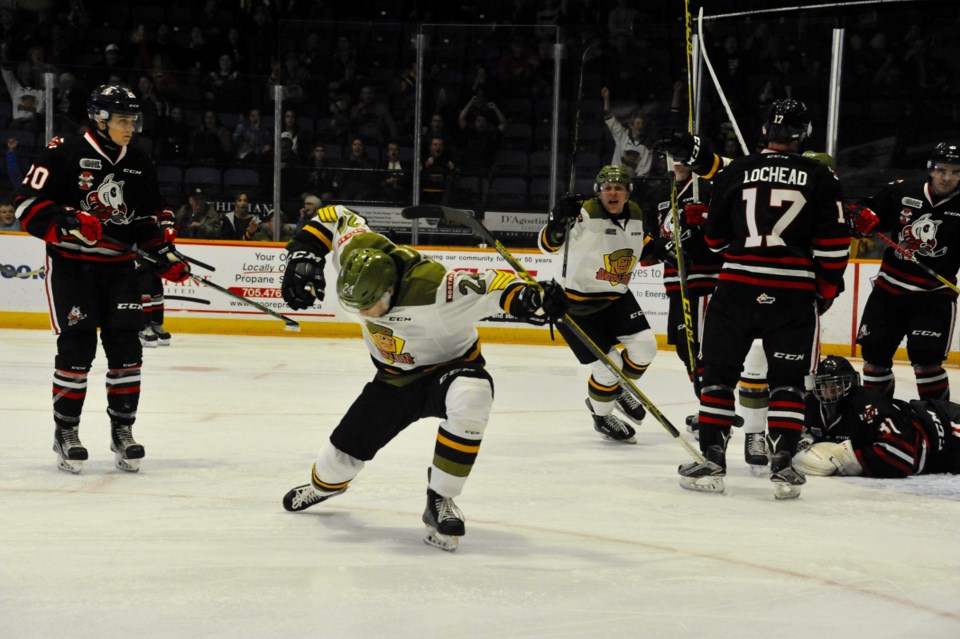 It’s the last week of August 2018. Battalion players and prospects are getting ready to hit the ice for intrasquad games with many hoping to make the team out of camp. But among those names, there was a notable absence. The teams’ second highest scorer from the previous season was nowhere to be found.

Days earlier Luke Burghardt had announced that he would be forced to retire due to an issue with his spinal column.

It was a blow to a team that had retooled itself midway through the 2017-18 season and was hoping to build upon the second half success with a dominant top line featuring two over-age players in Justin Brazeau and Burghardt, along with a 19-year-old Matthew Struthers. Brazeau and Burghardt put up 146 points, and Struthers (acquired mid-season) added 27 points in 30 games. To say the top line was going to be an area of strength going into 2018-19 would be a bit of an understatement.

But sometimes, not everything goes as planned, and the North Bay Battalion was now looking for someone to fill that gap.

Very quietly, that person has become Brad Chenier. And while the return of Luke Burghardt to the North Bay Battalion is an amazing story unto itself; the rise of Chenier into one of the teams most potent offensive weapons is something not many people would say they saw coming.

“Taking a look back to year one, I think through the years it’s just the development and confidence I’ve been building up,” Chenier said about his production that puts him third among all Battalion skaters with 48 points through 43 games. “Obviously working on my skill in the summer a lot and training hard, I think it’s all coming together right now.”

Hailing from Hanmer, Ontario (just outside of Sudbury) Chenier looked to a fellow Northern Ontarian to keep him company in his training in the off-season; New Liskeard native, and captain of the Battalion, Justin Brazeau.

“He definitely has a lot more skill than people give him credit for," said Brazeau about Chenier.

"I trained with him in the summer, I skated with him a lot, and I definitely got to see that side a bit more.”

But did a little extra viewing in the warmer months give Brazeau any indication that Chenier would produce at this rate?

“Every year you get older in this league and you have to step up your responsibilities,” says Brazeau. “Losing [Burghardt] at the beginning of the year was tough and I think [Chenier] has done a really good job of filling in that spot.”

Although he was known more for his physical play than his scoring prowess in his first few years in the Ontario Hockey League, Chenier was the complete player after his draft year, playing 52 games for the Rayside-Balfour Canadians of the Northern Ontario Junior Hockey League. His 72 points, 29 of those goals, and 77 Penalty Minutes were more than enough to qualify him, earning that league's Rookie of the Year award in 2015-16.

“It was pretty cool,” Chenier says reminiscing about the award.

Standing in the concourse of the Leon’s Centre before Sunday’s game against the Kingston Frontenacs, Chenier says a lot of credit for the award went to everyone around him at the time.

"The coaching staff and the players playing with me, they really much put it on my plate for me, always setting me up with nice goals," he said.

"They were always pushing me to do my best.”

Battalion Assistant Coach Scott Wray had to find a game plan against Chenier when he was the head coach of the Powassan Voodoos of the NOJHL, at the same time Chenier suited up for the Canadians. Wray says he’s much happier having Chenier on his side now, “he was one of those heart and soul type players, even as a 16-year old.”

“He played really hard against us every night. He was known around the league for being a little bit of a rat, but he excelled at it. He wasn’t shy to finish his checks and then he could go and score a couple of goals. You hated to coach against him because you had to keep your own team in check and level headed, but he could get under their skin and you have to respect that.”

Wray added, “He was a real impact player.”

It’s not often guys can have the whole package at a Junior-A level and transfer all of that to Major Junior. But after spending most of his first season in a traditional checking role, Chenier broke out with 17 goals one year ago, and this year he has surpassed his combined point totals from his first two years.

“I don’t think Chenier could change his game too much,” says Wray. “He has to be a chameleon and just adapt to what the league brings him. He’s done a really good job in the OHL to do that. He’s got a sneaky skill, he’s got a hard shot, great release and he’s not afraid to go to the paint.”

And when thinking if Chenier could be the go-to guy with the unexpected loss of Burghardt, Wray says “for sure, he came off a 17-goal season and when he’s out there he’s taking advantage of playing against other teams second and third pairings.”

“I think everyone wants to score obviously,” says Chenier who also realizes he has the tools to impact other areas of the game.

“If I’m not scoring points, I’m hitting or blocking shots or standing up for my teammates, I just try to do it all. I put my work boots on and try to give the guys energy. Be first on the forecheck, getting pucks and create turnovers. Any mistake for the other team is an opportunity for us,” he says.

Opportunity is the key word. There was an opportunity for someone to step up and not just produce for the Battalion, but to lead the Troops.

Chenier was named as an alternate captain before the season, while his gym buddy Brazeau got the “C”.

It’s remarkable to look at how far Chenier has come. From playing nine games as a call up in 2015-16 to sitting in among the top 30 league scorers with 25 games left to play in the regular season.

Taken in the fourth round of the 2015 draft, Chenier has the potential to return as an overage player next year. He would be the highest North Bay drafted player to finish his OHL tenure with the Battalion since Riley Bruce (chosen 3rd round in 2013).

Chenier has also been on both sides of the Sudbury-North Bay rivalry, playing for the Nickel City Sons and Sudbury Wolves minor programs. It’s a rivalry that gets to be renewed on Wednesday when the Troops visit the Wolves.

"There’s a lot of [people who] will throw chirps at me in Sudbury but, nothing too bad, although there’s nothing better than to stick it in their face with a win or a big goal. I love it.”

And how could you expect anything else?

About the Author: Matt Sookram

Matthew Sookram is a Canadore College graduate. He has lived and worked in North Bay since 2009 covering different beats; everything from City Council to North Bay Battalion.
Read more