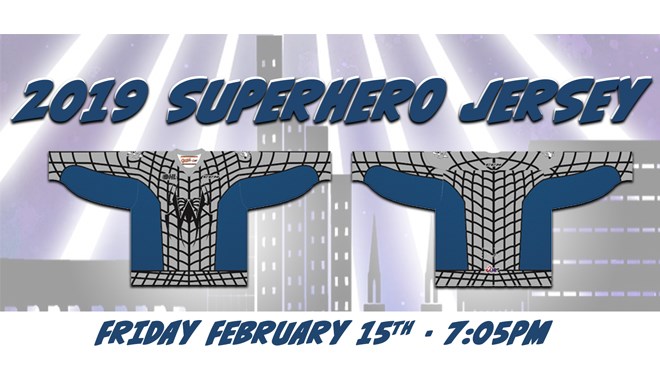 This year, the Wolves will wear Spiderman influenced jerseys as they get set to battle the Sault Ste. Marie Greyhounds in game five of the Bell Challenge Cup at 7:05 p.m.

These special jerseys will be auctioned off throughout the game with proceeds going to the Northern Ontario Families of Children With Cancer (NOFCC). A select number of jerseys will also be available online after the game for bid at www.auction.chl.ca.

Friday’s game is sponsored by St. Louis Bar and Grill who have been the game’s annual game night sponsor since the inaugural game in 2016. St. Louis will be on hand with prizes for lucky fans.

Fans are encouraged to dress up as their favourite superhero for the chance to receive special offers and win prizes. Kids 12 and under wearing full superhero costumes will be able to receive admission to the game for only $12 and have access to a special concession offer.

“We are so incredibly proud to have been picked again by the Wolves for the Superhero Night,” said Dayna Caruso, Executive Director, NOFCC. “Being involved with such a big local organization provides a huge opportunity to raise awareness for our charity and childhood cancer; we are so thankful to the organizers for all their hard work and dedication to families in our community and around the North. The funds raised will go a long way in supporting our families”

The Sudbury Wolves were the first OHL team to wear superhero jerseys four years ago and a number of teams have since followed suit.

“This has become a night that many fans look forward to each season and we have had tremendous support from many of our community and corporate sponsors. This year, the game is expected to grow even more as members of the Toronto Maple Leafs family including a number of Leafs alumni will also be on-hand.”

Game attendees are also invited to visit their table behind section 2 for the chance to win the Ultimate Leafs Family Experience including 4 tickets to see the Toronto Maple Leafs vs. New York Rangers on March 23.

Prior to Friday’s home, the Wolves will host Northern rivals, the North Bay Battalion Wednesday at 7:05 p.m as the Wolves look to extend their win streak to nine games and battle for first in the Central Division.

Wednesday’s game is sponsored by Bruce Power and one lucky fan will win an iPad in the Bruce Power Matching Game during the second intermission.

Tickets for both games are on-sale now at the Sudbury Arena Box Office, by calling 705-671-3000, or online at greatersudbury.ca/tickets.