Take up competitive tennis and you could rub elbows with the greats, says Sudbury enthusiast 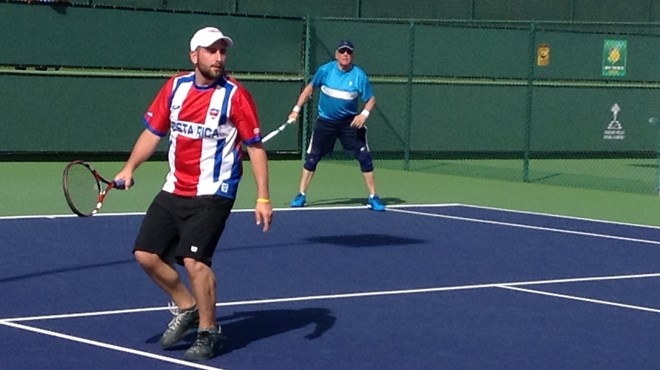 The Sudbury Indoor Tennis Centre will host the second annual Northern Ontario Tennis Classic from April 26-28, with one of Canada's most decorated tennis players of all time, Daniel Nestor, making a stop in the Nickel City.

The event will offer competition for all levels of tennis players, and one of the event's organizers is hoping that it can serve as a springboard to get more people in Sudbury and Northern Ontario involved with the game.

Neil Lind is the co-chair of the Northern Ontario Tennis Classic, and by all accounts, had a late introduction to the game. Lind, like many Northern Ontarians, grew up playing hockey and a myriad of other team sports.

While he says he wishes he'd gotten into tennis earlier, his late start didn't keep him from getting up close with some of the best players in the game.

"I started playing tennis when I was 38,” said Lind.

“I had played a lot of squash in the 80s and a lot of the guys had moved on to tennis. After a while I wanted to get into some more competition and in 2007 I joined the USTA (United States Tennis Association) with a group from Sault Ste. Marie."

Lind was still living in the Sault at the time, and its close proximity to Michigan afforded him the opportunity to test his mettle against competition from across the boarder. Players in the USTA are given rankings based on the National Tennis Ranking Program.

Lind is a 3.5 ranking - for comparison, Roger Federer is ranked a 7.0, which is the highest achievable rank - and by his own admission, considers himself to be an average tennis player.

After playing in USTA tournaments at the 3.5 level in Northern Michigan and making it to the Michigan State finals on several occasions, Lind signed up for a tri-level team event tournament in Traverse City, Michigan.

A tri-level event is one where you have two or more players in a division like 3.5, 4.0, and 4.5 levels on the NTRP scale, playing together as team, like Davis Cup or Ryder Cup action in golf.

Unable to wrangle enough Canadian tennis compatriots to take part in the event, Lind caught a good break, when a longtime USTA player from Michigan asked him to join his tri-level team.

"The goal was to try and reach the National USTA tri-level Championships in Indian Wells, California, playing concurrently with the pros," said Lind.

This year's tournament at Indian Wells just wrapped up on March 17, with Austrian pro Dominic Thiem knocking off Roger Federer in the final. Thiem defeated Canadian Milos Raonic in a grueling match in the semi-finals that went to a tie-break in both the first and second sets, with Thiem defeating Raonic 7-6, 6-7, 6-4.

Back in 2016, when Raonic reached the finals and was defeated by the world's number one ranked player, Novak Djokovic, Lind was right there to witness the match in person, and walked the same courts as some of the best players in the game.

Lind and his team reached the event, representing the Northern Michigan region, after winning their way through the Midwest Division championships and advancing to the national championship in California where they would be playing concurrently with the best players in the world.

"We played on the outer courts and not the main ones of course, but we got to watch Milos warm up, standing no more than 15 feet from him," said Lind. "We watched him throughout the tournament and in the final."

Lind explained that tennis can present some unique opportunities that make it different than a lot of sports. Playing at the same venue and rubbing elbows with some of the best players in the sport is something that you don't get to do playing beer league slo pitch or hockey.

"I would say that you just never know where it's going to take you," said Lind. "I started playing tennis at 38 years old and there I was, a 61-year-old guy from Northern Ontario, playing in a national championship."

For more information on the Northern Ontario Tennis Classic or to register, call the Sudbury Indoor Tennis Centre at 705-688-1414.