Third-period surge from Ottawa too much for Wolves 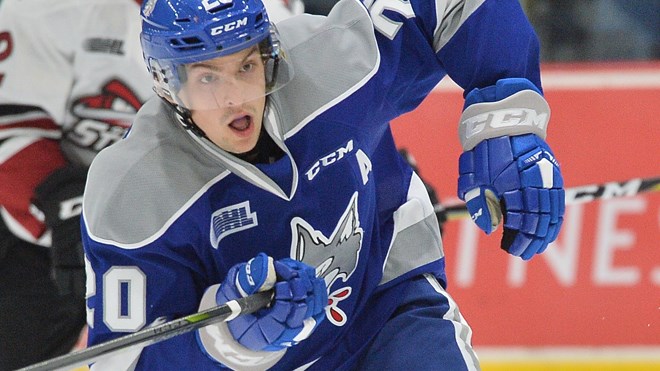 Sudbury Wolves forward Shane Bulitka picked up his 11th goal of the season in the Pack's 6-3 loss to the Ottawa 67s this afternoon. (Terry Wilson / OHL Images)

In a rare Wednesday afternoon game, a third-period surge by the Ottawa 67s was too much to handle for the Sudbury Wolves on Nov. 21, as The Pack found themselves on the losing end of a 6-3 final score.

The Wolves drew first blood in the matchup, played at TD Place in Ottawa, with Macauley Carson scoring his seventh of the season about five minutes into the first period, with help from Emmet Serensits and Chase Stillman.

Stillman put the Wolves up by two at 13:27. Assists went to Carson and Adam Samuelsson.

The 67s managed to get one back before the end of the period, with Jack Quinn scoring his 11th goal of the season on Christian Purboo.

The Wolves took a one-goal lead into intermission.

In the second period, Shane Bulitka put the Wolves up by two while on the power play at 7:28 with assists going to Quinton Byfield and Kalle Loponen. It was Bulitka's 11th goal of the season.

Ottawa answered back with Quinn's second goal of the game, and the game remained 3-2 going into the second intermission.

In the third period, it seems the Wolves fell apart, with Ottawa scoring four unanswered goals.

The Wolves are back in action Friday night as they pay a visit to the Kingston Frontenacs. The puck drops at 7 p.m.