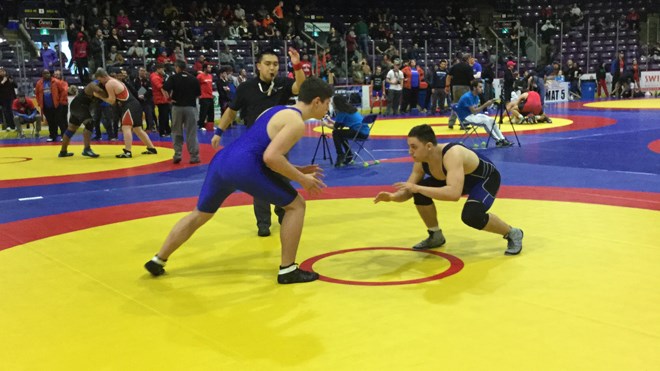 Quade Howald (left) was one of three Sudbury wrestlers to win bronze at the OFSAA Wrestling Championships in Brampton. Supplied photo.

Zoe Mullin-Belanger (Lo-Ellen) would need five bouts, Quade Howald (Sacré-Coeur) stretched that by one and Racha El-Darazi (Confederation) topped them both, overcoming a second round loss and reeling off six straight wins.

In the end, all three local wrestlers would share SDSSAA bragging rights at the 2017 OFSAA Wrestling Championship in Brampton, with the trio all returning north with bronze medals in hand.

She would rebound, however, by taking out Angel Williamson (St. Francis Xavier) and Ashley Gravelle (ESP Renaissance) to finish just one spot back of French.

Howald, who became the first local male wrestler to medal since Spencer Burton (Chelmsford) in 2010, started off strongly, getting the better of Maximus Meekis (Pelican Falls), Branislav Orescanin (Richview) and William Layman (Tecumseh) right out of the gate.

Tyson Fletcher (Holy Cross) would stop Howald in his tracks, en route to a silver medal, but the local returned to his winning ways against familiar foes, beating both Orescanin and Layman for a second time each and finishing third in the 95 kg division.

With limited to no competition in the 95 kg class locally this year, Howald opted to compete in the unlimited division, cutting back in time for the NOSSA championship. Heading into OFSAA with a goal of cracking the top three, the 17-year-old future mechanical engineering student was focused on areas that he could control.

"It doesn't matter who it is, I have to do what I do best," said Howald. "I have to control the match. I can't let them control my movements, I have to go at my pace."

As for El-Darazi, who finished fourth in her grouping at the 2016 OFSAA meet, she followed a familiar trend, having recorded the most wins of any local wrestler both last year (with six) and this year (with seven).

Her very busy schedule was necessary when she followed up a victory over Rosalee Graham (Thomson) with a loss at the hands of Elinor Brown (Bishop Ryan), who went on to claim gold.

Following is a complete breakdown for all local wrestlers (based on our best efforts basis to not miss anyone):