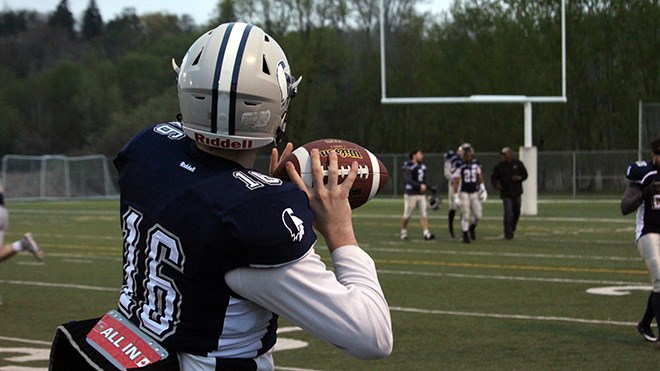 The Sudbury Spartans defeated the Oakville Longhorns by a score of 35-26 in their season opener. (Keira Ferguson/Sudbury.com)

With a chilly spring storm nipping at their heels, the Sudbury Spartans welcomed long-time rivals the Oakville Longhorns to the James Jerome turf field May 25, for what would turn out to be a strong season opener for the boys in blue and silver.

Sudbury broke open the scoreboard on their first possession of the evening, marching down the field and taking a 7-0 lead on a short run by all-star running back Josh Cuomo.

A quick turnover in the next possession got the pig skin back in Spartan hands, allowing them to set up a mirror image of their first powerful drive.

Fired up from an early-game advantage, Spartans' second-year quarterback Hunter Holub and his receivers shredded Longhorn defence, giving running back Matt Glass a clear path to the end zone. Place kicker Massimo Cimino was good on the extra point and Sudbury went up 14-0 in the first quarter.

Another Oakville turnover gave Spartans’ Cuomo the opportunity to complete his second major run of the game, on the team’s third offensive possession. Spartans led 21-0 after the first period.

The Longhorns made it onto the board in the second quarter, thanks to a clean 53-yard catch and run from quarterback Kyle Holloway into the mitts of wide receiver Kale Rive. The first half ended with a 21-6 advantage for Sudbury with Oakville unable to collect on their extra point.

Longhorn’s receiver Isaiah Small kept the ball rolling for Oakville in the third period, breaking through Spartans defens=ce on a catch and run play to claim the touchdown. Oakville missed out on their two point conversion, allowing Sudbury to hold a 21-13 lead heading into the final frame.

Things got heated in the fourth quarter, when Longhorn’s defensive back Malcolm Stoke intercepted an errant pass by Spartans’ quarterback Holub, returning it for the touchdown. Oakville was successful in their two point conversion, cutting Sudbury’s lead to one.

The Sudbury Spartans were quick to respond, forcing themselves down the field until Cuomo could make his third and final run of the evening, giving Sudbury an eight-point advantage. Oakville lost the ball in the next possession, giving Sudbury one more chance to distance themselves from their southern counterparts.

Backed by the cheers of a hometown crowd, the Spartans sliced through Oakville's defence, allowing Glass to run in his second touchdown of the game.

Oakville managed to make one final touchdown with less than a minute left in play, but it wasnt enough to keep Sudbury from claiming the win with a 35-26 final.

The Sudbury Spartans will face off against North Bay 7 p.m. on June 1, at the James Jerome Sports Complex. The Jr. Spartans also take on that day, with kickoff at 4 p.m.