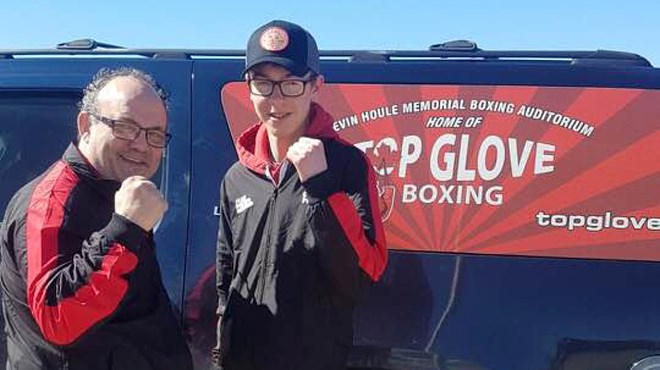 Apolloni is heading up the largest team at the competition, as Ontario has 58 representitives vying for national gold in a range of age groups and weight classes.

"Thank God for social media" said Apolloni with a laugh, during a phone call with Sudbury.com on Wednesday. "Some of the fighters are on-site, some are staying half an hour from the venue, so keeping in touch with all of them is a challenge. We've been able to stay in contact through social media and I just go wherever I'm needed."

With Canadian National Team coaching experience under his belt, and a decades-long history of training and preparing boxers, the competition is nothing new to Apolloni, who reiterated a message that he has been preaching to his fighters for years.

"I always say it's not about wins and losses when you get in there," said Apolloni. "It's about how you perform."

As the head coach of Team Ontario, Apolloni has 58 fighters under his wing at the national championships, and while he may not play favourites, he will undoubtedly have a close eye on Sudbury teen, and Top Glove boxer, Patrick Martin.

At 15, Martin has been boxing under Apolloni's tutelage for two years now, and this is the biggest stage that he will be stepping on in his brief boxing career.

"I'll be in Patrick's corner," said Apolloni. "For Patrick this is all about getting more experience and hopefully avenging a couple of losses."

A number of Team Ontario boxers are travelling without their coaches, and Apolloni will be cornering those fighters as well. With the goals of gaining experience, and having a strong showing at the forefront, Apolloni adds that this is still a national competition and for the boxers in the Elite Division, there is a little bit more at stake.

"The top end fighters in the Elite Division, they're looking to qualify to fight for Canada at the Olympics or the Pan-Am games," said Apolloni.

Still early in his career, Patrick Martin will be competing in the Junior Division, with his first bout scheduled for Thursday, April 25. Team Ontario has 28 fighters stepping into the ring on April 24.

If you want to catch Patrick Martin, or any other Ontario fighter's bouts, Boxing Canada is livestreaming all the fights on their YouTube channel.

Check out boxingcanada.org for the full schedule of fights.