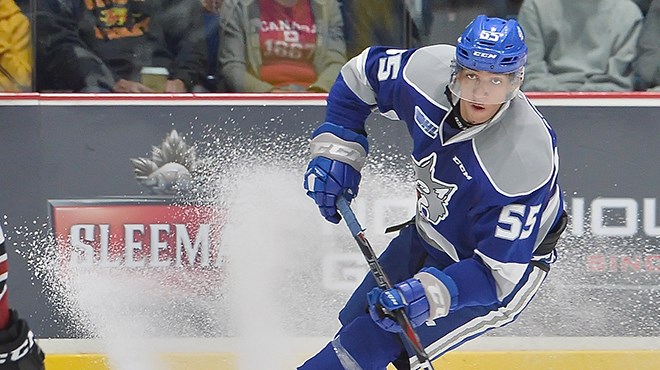 First overall pick from the 2018 OHL Priority Selection Quinton Byfield was named as one of six finalists for the OHL's Rookie of the Year award.

The Ontario Hockey League announced the finalists for seven of the league's major awards on Thursday, and there's no shortage of representation from the Sudbury Wolves.

First overall pick from the 2018 OHL Priority Selection Quinton Byfield was named as one of six finalists for the league's Rookie of the Year award. Byfield enjoyed an outstanding first season in the OHL, racking up 29 goals and 32 assists for 61 points in 64 games.

Byfield finished third in rookie scoring behind a pair of other finalists, Saginaw's Cole Perfetti and Ottawa's Marco Rossi.

To no one's surprise, Wolves netminder Ukko-Pekka Luukkonen was named as a finalist for goaltender of the year, after finishing the regular season at, or near the top of every statistical category. Luukkonen led the OHL in SV% at .920, was third in goals against average, posting a 2.50 GAA, and tied for the league lead in shutouts and wins along with Niagara's Stephen Dhillon, at six and 38 respectively.

The Wolves saw a massive turnaround from their 2017-18 season where they finished dead last in the OHL standings, winning just 17 games out of 68. This year's edition of the Wolves bettered their win total by 26, posting 43 wins and 91 points to finish seventh overall in the OHL standings.

The team flirted with or tied franchise records for consecutive wins and home wins, and strung together wins consistently throuhgout the season, but for a small blip around Christmas with Luukkonen away at the World Junior Hockey Championships.

This about face earned Wolves head coach Cory Stillman the nod as a finalist for the OHL's Coach of the Year award, along with London Knights coach Dale Hunter, the Wolves second round opponent Andre Tourigny and his Ottawa 67's, and a trio of others.

Ukko-Pekka Luukkonen was also nominated as the Wolves' representative for the Red Tilson Trophy as the league's most outstanding player.

The 2019 OHL Awards Ceremony takes place on Wednesday June 5 at the Hockey Hall of Fame in Toronto, however award recipients will be announced periodically throughout the remainder of the 2019 OHL Playoffs.

Additional player awards to be announced include Humanitarian of the Year, Academic Players of the Year, and the 2018-19 Mickey Renaud Captain’s Trophy recipient.