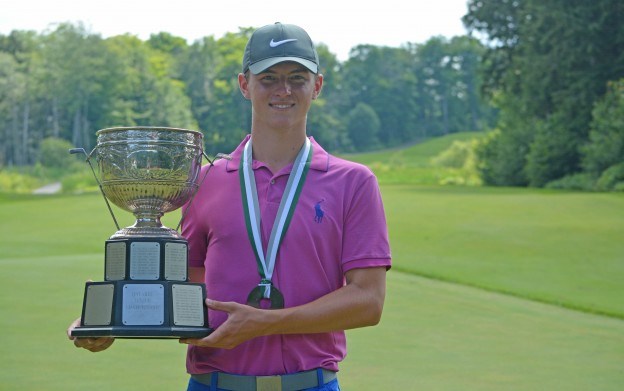 2018 Idylwylde Invitational winner Tristan Renaud. Renaud overcame a five-shot deficit in the final round of Acura Ontario Championship at Tangle Creek Golf & Country Club to take the win and earned himself an exemption directly into the 2019 Canadian Junior Boys Championship. (Supplied)

Lea Lemieux doubled down on the second stop of the Sudbury Junior Golf Tour a few weeks ago.

Not only did the talented ball striker capture top spot in the U13 age bracket, her score of 83 comfortably ahead of Cole Dubowsky and Laake O'Neil, at 95 and 96 respectively, but she also earned bragging rights in the closest to the pin competition on the second hole at the Lively Golf Club.

Moving over to the U16/U18 division, Ethan Mulligan (76) recorded a five stroke victory over Joseph Colasimone (81), with Jake Dubowsky and Vincent Palladino another shot back at 82.

Cole Dubowsky also walked off with longest drive honours on the 13th hole, as many of these same young golfers prepare to tackle Pinegrove Golf Course on July 7, beginning with a 9 a.m. tee-off time.

Following are complete results for all participants who picked up points at the Junior Tour stop in Lively:

In other local golf news, Tristan Renaud overcame a five-shot deficit in the final round of Acura Ontario Championship at Tangle Creek Golf & Country Club, kicking off his final round with an eagle on the 486-yard par five and finishing the tournament with a one over par score of 217, one shot better than Brandon White (Camelot G & CC).

The Idylwylde Golf & Country Club representative sat in a three-way tie for first place after round one, carding a two-under score of 70, but fell back somewhat on day two, finishing at 77.

“If you look at it on the scorecard, it was pretty blemish-free, but there were a lot of good par saves and a lot of short-to mid-range putts I made,” said Renaud in an article uploaded on the Golf Canada website. “It wasn’t a scoring day per-se – the wind was strong, so I’m pretty happy with it.”

Renaud also earned himself an exemption directly into the 2019 Canadian Junior Boys Championship, being hosted by the Covered Bridge Golf & Country Club (Hartland, NB) from August 11 - 15.

Finally, a handful of familiar faces from the Idylwylde Invitational dotted the top end of the leaderboard at the 27th Annual Ontario Mid-Amateur Golf Championship two weeks ago at the Pointe West Golf Course in Amherstburg.

Two-time local tournament champion Kyle Rank (2016 & 2014) topped that group, deadlocking in fifth place with David Lang (Donalda Club) with a three round score of 215 (one under par).

Local mainstay Jay Jewett (Timberwolf Golf Club) was just one stroke back, jammed into a four player grouping at 216 that all finished tied for seventh place, while Dave Bunker (Idylwylde finalist in 2012) found himself in another quartet at 217, tied for 11th.

Charles Fitzsimmons (Thornhill Club) took top spot at the event, displaying impressive consistency with a run of 69-70-71 over the course of the three days, his total of 210 just enough to finish ahead of both Philip Arci (King's Riding - 211) and Simon McInnis (Mississauga - 212).

Upcoming events of interest on the golf calendar include the Ontario Men's Amateur Championship (July 8th - 11th), the 26th Sudbury installment of the Ryder Cup from July 5th to the 7th, and the 66th annual Idylwylde Invitational from July 18 - 21.