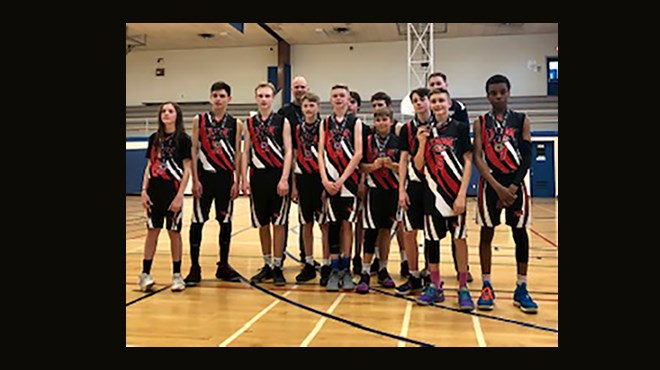 The Sudbury Jam U14 Boys saw a little bit of everything on their run to a silver medal at the 2019 Ontario Cup Championships. (File)

Sure, some teams cruise their way through to an appearance in a provincial final. That, however, was nowhere near the case for the Sudbury Jam U14 Boys, as coach Greg Sandblom and company battled a little bit of everything before settling for silver at the 2019 Ontario Cup Championships.

It was an ominous start to the weekend in Ottawa, as the Jam boys found themselves trailing by no less than 23 points, at the half, in their opening encounter with the MUMBA Elite White.

What seemed initially to be an insurmountable lead was very gradually reined in by the locals, trailing by 14 heading into the final quarter of play. A tenacious defense and some sharp-shooting of their own would force overtime, with momentum clearly on the side of the Jam, who pulled away in the extra session, recording a 60-52 win.

Lest they thought that the hurdles were now behind them, the Sudbury crew found themselves behind, yet again, but this time by just three points, yet only 15 seconds showing on the clock. A fouled three-point attempt would send Abdallah Koulbou to the line with a chance to deadlock the contest.

Making good on his first two shots from the charity stripe, Koulbou would see his final attempt rattle in and out, but thankfully, directly into the hands of teammate Matthieu Crittenden, whose put-back basket paved the way for what would finish as a 54-50 triumph over the Canadian Basketball Academy from Toronto.

Believing they had clearly put their coaching staff through the ringer in their first two games, the Jam improved to 3-0 with a convincing 64-44 win over the Guelph Gryphons, with the winners converting no less than eight three-point attempts.

Matched against a tough Oxford Attack team in a highly physical affair in the grand finale, the Jam were down by eight with only minutes to play. A frantic rally was capped off with a game-tying basket, for Sudbury, with two seconds to play, but the effort had taken its toll.

In spite of an early lead in overtime, the U14 Jam lads would fall 63-59, returning home perhaps a tad disheartened, but extremely proud of the weekend they had compiled.