Within the world of basketball, there exists a sub-culture that belongs to the dunk specialists. In this particular stratosphere of hoopdom, Sudbury's Jordan Kilganon is among the elite.
Feb 13, 2014 7:51 PM By: Randy Pascal 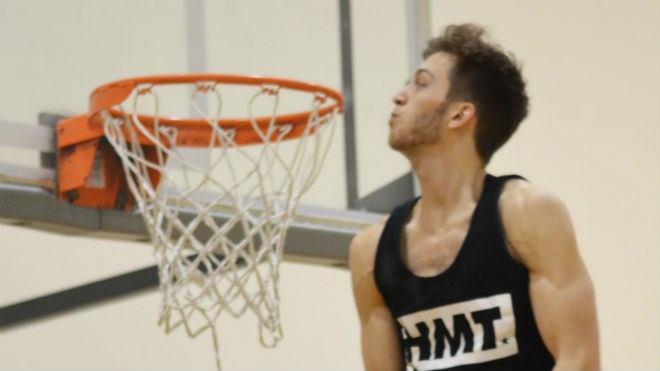 Sudbury's Jordan Kilganon gets a little closer to the rim than most people would ever dream. The industrial design student at Humber College is a graduate of Ecole Sacré Coeur. Photo by Brianna Bell.
Within the world of basketball, there exists a sub-culture that belongs to the dunk specialists. In this particular stratosphere of hoopdom, Sudbury's Jordan Kilganon is among the elite.

The 21 year-old is one of eight participants invited to take part in the NBA All-Star weekend festivities this weekend in New Orleans, a group that will contest Spite Slam Dunk Showdown for amateur dunk champions.

Basketball great Lebron James will be among the judges. Pretty heady stuff for a young man only a few years removed from his high school days at Ecole Sacré Coeur and currently studying industrial design at Humber College.

A life-long basketball player, Kilganon is the first to admit the skill-set needed to prosper in dunk competitions is not necessarily aligned with those required for a career on the court professionally.

"It's actually kind of surprising that so many guys that aren't that good at basketball can be quite good at dunking," he explained. "There are just some guys that are genetic freaks," he added with a laugh.

That might be a little harsh. But at just 6'1", small by even Canadian university basketball standards, Kilganon is blessed with some serious "bounce." At least, that's the description one will find on countless YouTube videos featuring the aerial acrobatics of the Northern Ontario lad.

His performance brought down the house at the St Mary's College Midnight Madness event last October and should be considered must-see viewing for anyone seeking an immediate adrenaline rush.

"In terms of co-ordination, ball movement quickness and that kind of stuff, I might have to say that I'm the best of them," Kilganon deadpanned. That might sound boastful, but there are many who agree.

Back in September, 2013, Kilganon travelled to Los Angeles to work with HoopMixtape, putting together a dunk-filled highlight reel. What was to be a two-week sojourn lasted three full months, filled with half-time exhibitions at collegiate basketball games and a few other competitions.

"Not a massive amount of people know that you can make somewhat of a living doing this," said Kilganon.

And while this sound like nothing more than a part-time hobby born of natural athleticism, it is anything but. Kilganon has dedicated hundreds, perhaps thousands, of hours perfecting his passion.

"My arms get messed up, it's really bad," he said. "They're both fully purple all over the place, because I stick my elbows in the rims a lot. I've hit my head on the rim a few times."

Considering these competitions are held with NBA regulation ten-foot baskets, that is some serious elevation.

Yet, it's certainly not all about the vertical, nor the ability to rapidly windmill the ball, mid-air, between legs, over the head and into the basket.

"It's about being creative," said Kilganon. "A lot of dunks that you think are impossible, you just have to try it.

"And not just once, even if you're not even close. You gotta dream, you've got to try different things."

To Kilganon, this has always seemed natural.

"I just get fidgety when I see a basketball net," he admitted. "I need to dunk. At 14, I started dunking almost every single day, or most every day that I could, for three to four hours a day. Doing it that much, every single day, to your body, is kind of crazy," he acknowledged.

It was in part this realization that helped him develop as he devoted off days to working specifically on his vertical, taking to the weight room to increase every facet of his craft.

It is that kind of dedication and constant desire for innovation that caught the attention of 2011 NBA Dunk champion Blake Griffin.

"He saw one of my videos on a low net," said Kilganon. "He was looking for ideas for the dunk contest."

How about a dream dunk, that one that would forever put his signature in basketball dunk history? Kilganon suggests a complete front or back flip dunk, without the aid of any mini-trampoline or other device.

"I would have to train for a year straight, non-stop, just for that dunk."

Difficult, but perhaps not impossible for this dunking phenom.