The Sudbury Wolves acquired one of the most coveted 18-year-old defencemen in the OHL by trading third-year veteran blue-liner Chris VanLaren, 19, for the Guelph Storm's Ben Chiarot.
0
Jan 11, 2010 5:02 PM By: Sudbury.com Staff 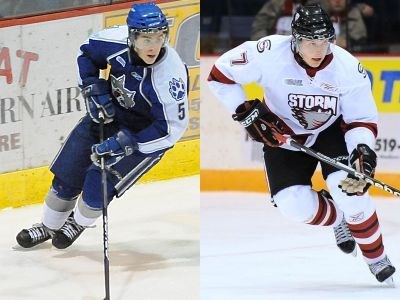 The Sudbury Wolves acquired one of the most coveted 18-year-old defencemen in the OHL by trading  third-year veteran blue-liner Chris VanLaren, 19, for the Guelph Storm's Ben Chiarot.

Chiarot was Guelph's second round selection in the 2007 OHL Entry Draft (34th overall) and he was recently drafted by the Atlanta Thrashers in the fourth fourth round of the 2009 NHL Entry Draft.

Chiarot is one of the biggest defencemen in the OHL, standing at 6-3, and weighing 220 pounds. According to Chiarot's agent, “Ben is extremely excited about playing for Sudbury.”

The Hamilton native is one of the top plus/minus players on the Storm with a +6 rating. He also leads the Storm in penalty minutes with 106. Chiarot has scored four goals and nine assists in 41 games with the Storm this season. This is Chiarot's third season in the OHL.

In 41 games this season for the Wolves, VanLaren has one goal and six assists, and has logged 65 minutes in penalties.

“We are extremely excited to acquire Ben Chiarot," said Wolves head coach and general manager Mike Foligno. “Ben gives us more size and toughness and adds more offensive skill to our blueline. He is an outstanding penalty-killer and he will be one of our top defencemen this year and next.”

Chiarot will join his new teammates Jan. 11 and will be ready to suit-up for the Wolves when they host the Oshawa Generals, Friday night at the Sudbury Arena.