Wolves make a pair roster moves including trade with Battalion 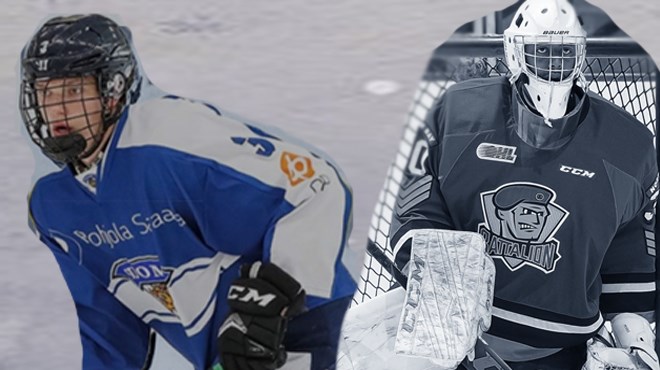 The Sudbury Wolves made a couple of roster moves recently, with defenseman Kalle Loponen committing to the team and goaltender Christian Purboo joining the Pack via trade.

The Sudbury Wolves wasted no time in addressing what has been a bit of a disturbing pre-season trend, bolstering their goaltending ranks via trade with the North Bay Battalion.

“Christian is a big and very athletic goalie with a high compete level and comes to Sudbury adding the experience of playing in the OHL,” said Sudbury Wolves VP Hockey Operations and General Manager Rob Papineau.

“He had a solid season with some outstanding runs last year for North Bay as well as an excellent start to the current season. We are very excited to have him join us and help our team have success this season.”

Christian will join the Wolves this week for practice and spend some time getting to know his new teammates. The Wolves resume pre-season action on Sept. 13 when they head to Timmins to face-off against the Rouyn-Noranda Huskies.

The Wolves will also get some support on the blueline as Finnish defenceman Kalle Loponen has committed to the team and will join the Wolves later this month following his participation in at the Toronto Maple Leafs training camp.

“We are excited that Kalle has been able come to the OHL and to Sudbury,” said Papineau.

“It was a cooperative effort between all parties to get this to happen with the best interest of the player at the top of everyone's mind. I would like to thank his agent Janne Lahti as well as the support received from his home team Karpat Oulu and their GM Harri Aho. Also, the professionalism and support from Kyle Dubas and Scott Pellerin and everyone with the Toronto Maple Leafs organization was very excellent.”

Loponen is a 5-10, 185 lb. right-shot defenceman with strong skating ability and good puck moving skill, opening up the ice with his two-way game.

“I am very happy about the chance to play for the Sudbury Wolves,” said Loponen. “My decision was easy because I have heard nothing but great things from Ukko (Luukkonen). I am looking forward to playing in front of the home crowd and to have the awesome feeling of playing on the Wolves home ice. I would also like to thank my hometown team Karpat Oulu for giving me the chance to play in the OHL for the Wolves."

Fans will get their first chance to see Loponen in the line-up on Sept. 27 when the Wolves host the North Bay Battalion at 7:05 p.m. for their 2019-20 home opener.

You can find the full Wolves season schedule at sudburywolves.com.