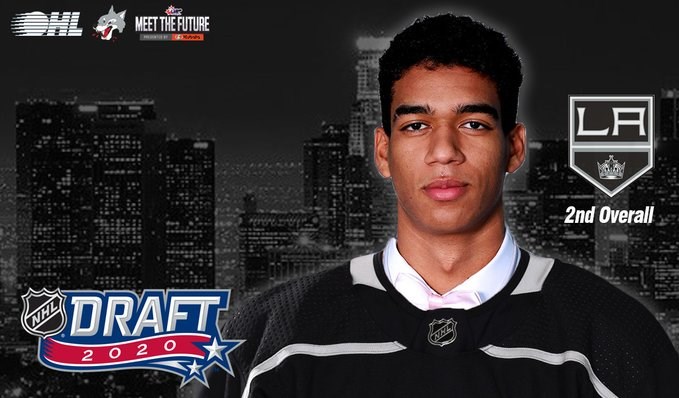 Sudbury Wolves centre Quinton Byfield was selected second overall by the LA Kings in the 2020 NHL Draft. (Courtesy of OHL)

Sudbury Wolves centre Quinton Byfield has made National Hockey League history by becoming the highest-drafted Black player ever, when the Los Angeles Kings selected him second overall in the NHL draft last night.

Byfield also broke a Sudbury Wolves record, becoming the highest-drafted Wolves player in the team’s 48-year history. In 1979, Mike Foligno was drafted by Detroit as their third pick.

Following the draft, Byfield told reporters he felt very special for getting into the record books for being the highest-drafted Black player in NHL history. He said the NHL is doing a “good job” with inclusivity, and thinks it would be nice to get involved in that capacity and be a positive role model.

He also said he thinks he can start playing on the national level next year.

In the 2019-2020 season, Byfield played 45 games for the Wolves. He scored 32 goals and notched 50 assists for a total of 82 points for the season. He also played for Team Canada in the World Junior U-20 Championships, playing seven games and earning one assist.

Congratulations and kudos for the 18-year-old poured in from fans, teams and the league.

History has been MADE 👊 Quinton Byfield becomes the highest-ever drafted Black Player in the @NHL history.