Wolves struck down 4-1 in London 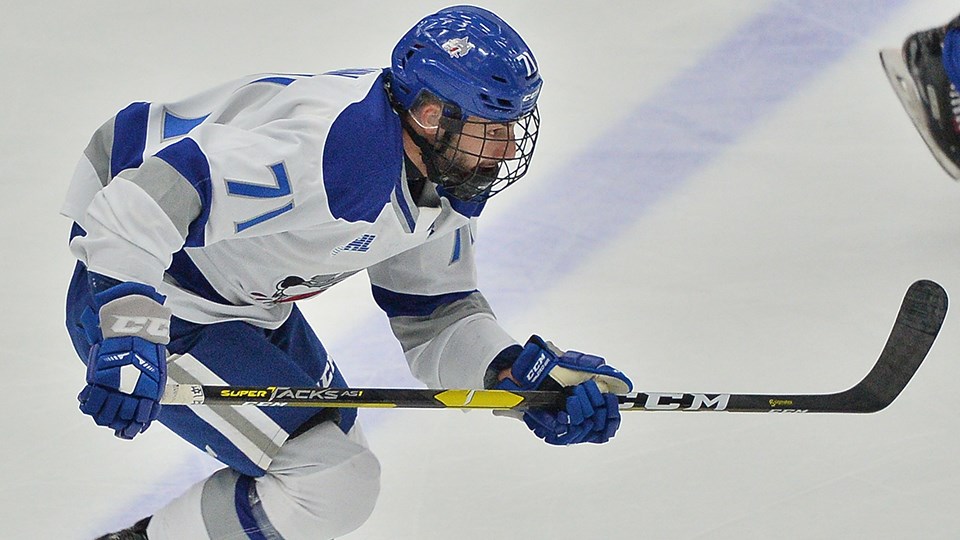 Sudbury Wolves' David Levin scores the team's first and only goal in Friday's match against the London Nights. (File)

On Friday night, Sudbury's wolfpack suffered their second defeat of the season at the hands of their Midwest Division rivals, the London Knights.

The Wolves came out strong in Friday's game, but would ultimately have their lead swept out from under them with a strong performance in the second period by their southern hosts.

The match, held at Budweiser Gardens, was called at a 4-1 final for London.

Longtime member of the wolfpack David Levin opened up the game for Sudbury with his 19th goal of the season, unassisted at 9:27.

London responded a little over a minute later with a goal of their own, by Ottawa Senators prospect Jonathan Gruden. Assisted by Nathan Dunkley and Antonio Stranges.

The teams moved into the second period tied at one point each, with shots on goal 11-10 in favour of the Knights.

It was a busy period for London, starting with Knights' Guskov delivering what would be considered the game-winning goal one minute and 30 seconds into play. The Minnesota Wild prospect was assisted by Billy Moskal.

Merkley scored the team's insurance goal during a power play a little over four minutes later, with help from Alex Regula and Connor McMichael. Bumping London's lead to two.

The final goal of the evening was made by Guskov with 44 seconds left in the period, with assists from Regula and Willms.

The Sudbury Wolves, on the other hand, made no progress on the scoreboard that period thanks to London netminder Mathias Onuska.

The Knights moved into the final frame up three, after outshooting their visitors 14-7 in the period.

There were no goals in the third period, but that didn't mean the ice was without its fair share of action.

Sudbury earned their first penalty call of the period five minutes into play, eventually racking up a total of 17 minutes for slashing, roughing and fighting.

London earned 15 minutes behind glass in the final frame for roughing and cross-checking.

With no goals from either side of the ice, the game was called at a 1-4 final for the Knights.

The Sudbury Wolves remain first in the Central Division, second in the Eastern Conference and fourth in the league overall, with 21 wins and 20 losses.

Two big divisional games on tap for Wolves this weekend
Feb 26, 2020 7:00 PM
Comments
We welcome your feedback and encourage you to share your thoughts on this story. We ask that you be respectful of others and their points of view, refrain from personal attacks and stay on topic. To learn about our commenting policies and how we moderate, please read our Community Guidelines.