GM Rob Papineau says young power forward can step in and make an impact in year one
Jun 3, 2021 6:00 PM By: Matt Durnan 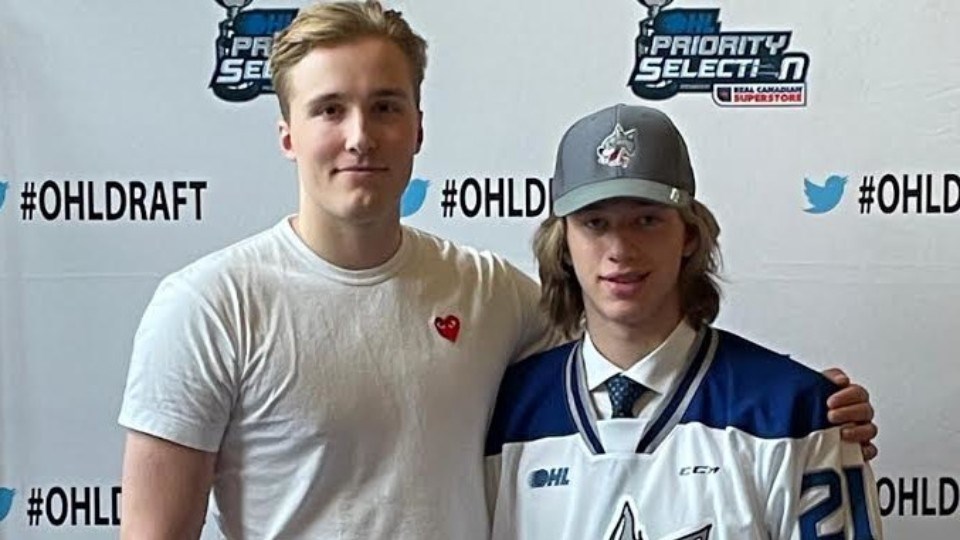 The draftee was welcomed to the club by former Wolves goaltender Ukko-Pekka Luukkonen, who spent much of last season with the Rochester Americans, along with general manager Rob Papineau.

The team describes Musty, from Hamburg, N.Y., as one of the best 2005-born players in North America and is a highly skilled, big, competitive power forward with exceptional puck control, playmaking ability and a dangerous pro shot who has a very bright future in the game.

The Sudbury Wolves were awarded the first overall selection for this year’s edition of the OHL Priority Selection, as a result of the first-ever OHL Draft Lottery held on May 5.

“To receive the Jack Ferguson award as the first overall pick is very humbling and exciting,” said Musty.

“To follow in the footsteps of some of the games’ greatest players like Steven Stamkos, John Tavares, Connor McDavid and Quinton Byfield is a huge honor. I am grateful and so excited to join Dario Zulich and Rob Papineau in Sudbury with the ultimate goal of bringing an OHL and Memorial Cup championship to Sudbury. I am excited to play with and against some of the best competition in the world and I can't wait to get started.”

“It was an amazing night when the Sudbury Wolves won the lottery, but today is even more amazing to be able to add Quentin Musty to our team,” Papineau said.

“He has been a dominant player for a number of years, and he was exceptional this season especially in the recent USA Hockey Youth Nationals where, as an underage player he led his team to the National Championship. Our fans are going to love Quentin as he is extremely talented, skilled and plays the game with such high compete that he will have our fans at the edge of their seats."

The 6-2, 190-pound left-shot forward is considered an intelligent player who possesses elite skills but with the added bonus of considerable drive and determination to win. Musty spent the 2020-2021 season with the North Jersey Avalanche, where he recorded 23 goals and 33 assists for 56 total points in just 27 games.

With the North Jersey Avalanche, he led his team to the USA Hockey Youth Tier-1 U16 National Championship. In six games played, Quentin tallied nine goals and eight assists for a total of 17 points.

He led both his team and the tournament in scoring. His awareness on the ice and his hockey IQ positions him well, as a great fit to join a young team ready to make waves in the OHL’s Eastern Conference and defend Sudbury Wolves’ Central Division Championship title next season.

“I am so ecstatic that we were able to select Quentin Musty today,” said Wolves owner and governor, Dario Zulich. “A player with his talent at his age is both rare and very special. We are anxious and looking forward to getting Quentin to Sudbury to join our great group of players and our team, to help us bring home the Memorial Cup to the City of Greater Sudbury.”

The OHL Priority Selection will get underway on June 4 at 7 p.m. beginning with rounds 1-3. Rounds 4-15 begin Saturday June 5 at 9 a.m. Wolves’ fans can follow along by visiting sudburywolves.com or on Facebook, Twitter, and Instagram.

Fans are also invited to tune in to watch the draft live on the OHL’s YouTube channel.