Wolves take one final bite of the Sarnia Sting

Sudbury's Blake Murray awarded the title of first star for delivering the frist, game-winning and insurance goal of the evening
Feb 15, 2020 12:00 PM By: Sudbury.com Staff 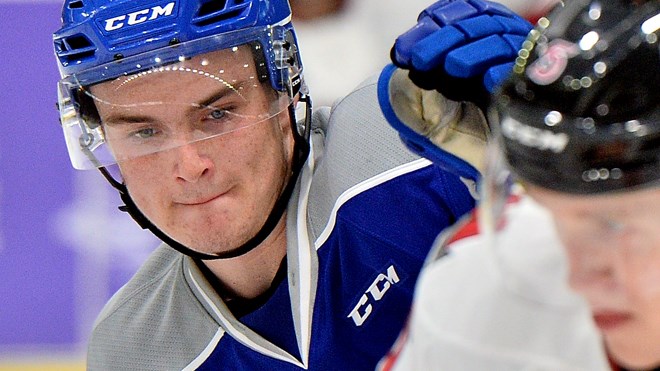 Sudbury Wolves earned their second victory of two season matchups against the Sarnia Sting on Friday at Sudbury Arena, pushing their win streak to three.

The Pack came out strong, but it wasn't until Sudbury netminder Christian Purboo took control of the net in the final frame, that Nickel City managed to push ahead to a 5-3 victory.

Sudbury's Murray broke open the scoreboard two minutes into play with assists from Chase Stillman and Samuelsson. But it wouldn't take long for Sarnia to return the favour.

Sting's Brayden Guy slipped past Purboo at 8:35 to settle the score, unassisted.

Seasoned Wolves player David Levin was right on his heels, closing out the period with his 25th goal of the season at 13:37, assisted by Brad Chenier and Matej Pekar.

Sudbury moved into the second period up one, after outshooting their guests 16-8 in the first 20 minutes.

Jacob Perreault evened the scoreboard four minutes into play, delivering his 33rd goal for Sarnia this season with help from Ryan Roth and Jamieson Rees.

Northern-born Jack Thompson restored the Wolves lead a little over three minutes later, assisted by Isaak Phillips, but the period wasn't over yet.

Sarnia's Guy delivered one more goal at 17:15 with help from Rees and former member of the Wolfpack, Peter Stratis.

The teams moved into the final frame tied at three, with shots on goal 14-9 in favour of Sarnia.

Murray returned to the net in the final frame to deliver two more goals for Sudbury over the course of the period. The first was made 12 minutes into play with assists from Stillman and Emmett Serensits and later considered the team's game-winning goal.

The second was delivered with less than a minute in play on the empty net of the Sting, with help from Brad Chenier and Macauley Carson. Which was later deemed the team's insurance goal.

With no goals that period by their opposition, the game was called at a 5-3 final for Sudbury.

Sudbury was ahead by a hair in shots on goal, outshooting their guests 10-9 in the final frame and 35-31 overall.

The Sudbury Wolves are first in the Central Division, second in the Eastern Conference and fourth in the league overall, with 28 wins and 24 losses.

On Sunday the pack heads south to take on the Niagara IceDogs, one week after scaring them off the Elgin ice with a 7-3 final.

The Niagara IceDogs sit fourth in the Central Division, eighth in the Eastern Conference and 18th overall, with 17 wins and 32 losses.