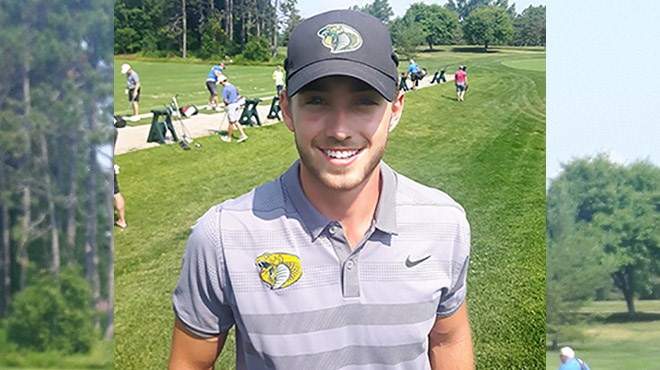 When the country's top amateur golfers tee-off on Aug. 5 at Glen Arbour Golf Course and The Links of Brunello in Halifax (N.S.), marking the start of the 115th edition of the Canadian Men's Amateur Golf Championship, Sudbury will be represented.

Lockerby Composite graduate and current member of the NCAA Bowling Green Falcons, Ward Kyle, is already a fairly recognizable name, even for those who might only casually follow the local golf scene.

Evan MacLean, by contrast, has flown under the radar a little bit more.

Certainly avid fans of the sport in Sudbury were already aware of the 18-year-old athlete who split his high-school time between Collège Notre-Dame and Lo-Ellen Park Secondary School. Both MacLean and Kyle have been part of a very promising wave of young golfing talent being produced largely at the Idylwylde Golf & Country Club, and right across the region, in general.

It would simply take MacLean a little bit longer to really make his mark.

"When I first got into high school, I started playing really well that summer, but then I hit a plateau for a couple of years," he said, preparing to play a charity event on his home course last week. "I didn't realize the difference between the high school or junior stage, and the level I needed to be at to move on to the collegiate level."

In fact, his next leap forward truly did not occur until the fall of 2018, when the teenage talent decided to up the ante in pursuing his dreams.

"I decided to take the first semester off, went to Florida for two months, lived with my grandparents, and played tournaments there." His goal was simple enough - try and at least get a foot in the door, an opportunity to launch himself, at some point, on to the radar of NCAA Division I schools.

Thankfully, the Parkland College Cobras (Champagne, Illinois) were ready to come to the table. A Division II junior college, Parkland had an opening in their lineup, allowing the only Canadian on their roster the chance to hit the ground up and running in the spring semester of the 2018-2019 season.

MacLean wasted little time rewarding head coach Corbin Sebens and company for their leap of faith. Competing at the Purgatory Invite in Noblesville, Indiana, at the end of March, the northern Ontario golfer carded a five under par 67 to capture the rain-shortened event, helping his team to a fourth-place finish.

"That was kind of a breakthrough for me," said MacLean. "I really didn't have any expectations."

While he might not have hit the winner's circle again in the spring, MacLean did manage to tie for second-best four-round score on his team at the NJCAA Division II Championships in May.

By all accounts, he and coach Sebens have connected nicely, very much on the same page in terms of identifying exactly what MacLean must do, in year two, to make the jump to the next level. "My coach and I were just talking about this before I left," said MacLean.

"Distance has always come naturally to me. I am able to compete with anybody off the tees, with my (long) irons. Where I need to work on my game is around the greens. My short game isn't up to par, so that's what I've been working on a lot this summer."

"At the collegiate level, they just don't miss inside of five or ten feet. If you want to play well and score well, you have to have a short game." Luckily, the Idylwylde Golf & Country Club course is a near perfect fit with the needs of the recent runner-up in the First Flight at the 2019 Men's Invitational (ironically, it was Ward Kyle who would beat MacLean to take bragging rights in that grouping).'

"These are such small, slopy greens, you really have to have your 'A' game around the greens to play well here," said MacLean. "This course is hard off the tee, with shot placement, and it's difficult around the greens. There are just not a lot of places that you can miss."

The hard work has seemingly paid off. Earlier this summer, MacLean overcame an opening round 81 at the OslerBrook Golf and Country Club in Collingwood, site of the Ontario Men's Amateur Golf Championship, following up with rounds of 73, 77 and 77 to earn a tie for 38th and a berth at nationals.

Just days after returning from the east coast, MacLean will leave for his second and hopefully final year at Parkland. "My coach has really good relationships with a lot of Division I coaches, which is a really good outlet for me, but it really does depend on how you are playing, how you are performing at the JUCO level," said MacLean.

"If you can win a tournament or show low sixties, that's obviously a big eye opener." It might even be enough, in fact, to move Evan MacLean out from under the radar, directly into the thick of things with the likes of Ward Kyle, Tristan Renaud, and other young local golf talents.