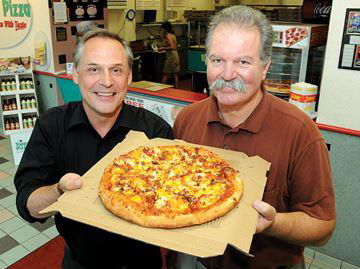 Accompanied by his family, Giuseppe Toppazzini left northern Italy for Canada in 1904. Like most new immigrants who came to Canada in the 20th century, Giuseppe and his family made the overseas journey for a brighter future. He also brought with him one more item – his family’s secret bread recipe. A baker by trade, Giuseppe would later open Toppazzini Bakery on Domenico Street in Copper Cliff’s Little Italy.

Over the next few decades, Giuseppe ran the bakery, first with the help of his son Bruce and later his grandson Ron.  Unfortunately, business started slowing down. With the growing number of chain grocery stores, it became more difficult for an independent specialty shop to survive in an increasingly competitive market. That is when Ron decided to experiment with using his family’s bread recipe for pizza crust.

Driven by the same strong work ethic as his nonno Giuseppe who came to Canada at the turn of the century, Ron saw more opportunity on the horizon. He looked to replicate the success of his first take-out pizza restaurant on Notre Dame and over the course of the next few years his focus turned to expansion. Three years after the opening of the Notre Dame location, another nine locations opened across Northern Ontario. The restaurant was renamed Topper’s Pizza and the expansion continued. In 2002 the first franchise location opened in Elliot Lake.

All the while, the business has prided itself on the personal touches. From hand selecting the tomatoes used in the sauce to working with local dairy farms to produce an optimum mozzarella cheese and meeting with farmers to access fresh vegetables for pizza toppings. Its pepperoni and Italian sausage are made from only the highest quality ingredients.

To this day, Topper’s Pizza is still owned by the Toppazzini family. Ron’s sons Keith and Kelly Toppazzini run the business. Topper’s Pizza is considered one of the province’s fastest growing pizza franchises, with 36 locations across Ontario, the most recent addition in Sault Ste. Marie.

The company has maintained its commitment to whichever community it serves. As a family-run business with strong family values, Topper’s Pizza participates in numerous charitable projects across Ontario. Throughout the years Topper’s Pizza has teamed up with local sports teams, food banks, hospitals, community and children’s organizations.

In 2012, SickKids Foundation was selected as the pizzeria chain’s charity of choice, helping pediatric patients and their parents across Canada. In 2014, Topper’s Pizza partnered with the Canadian Breast Cancer Foundation – Ontario Region in support of women’s health.