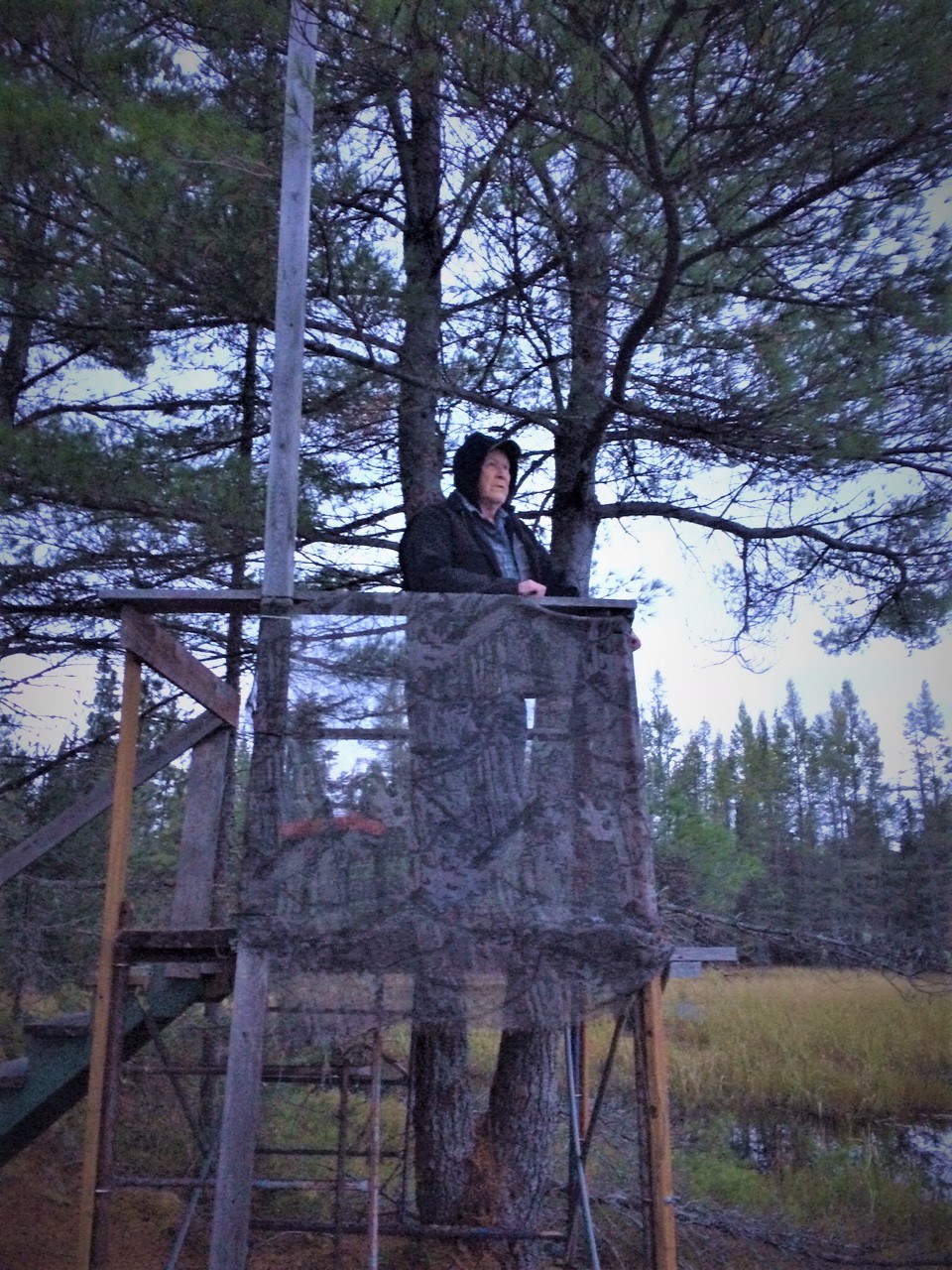 George Howards' 90th birthday wish was to be at the old hunting grounds on Nipissing First Nation. Phil Goulais Photo

George Howards didn’t get to see a moose called out by his nephew last weekend. It was at the top of his list of 90th birthday wishes.

But Howards got out to his old hunting grounds on Nipissing First Nation territory as planned. And the night before going to the camp north of Highway 17, a parade of friends and family gave him a drive-by celebration complete with fire trucks wailing.

“I didn’t want anything big done but that was nice, I was happy,” Howards said during a telephone interview with BayToday on Wednesday.

Howards is considered one of the community’s historians because of his strong memory of days gone by and a diligent collection of scrap books. He has separate albums of newspaper clippings and memorabilia for not only Nipissing but the North Bay Indigenous Friendship Centre, Bear Island and Dokis, among others.

One of the stories he shared was about when they buried his Great Grandfather Semo Commanda, a respected chief and hunter, who died at the age of 110 years old in 1938. It was wintertime and they brought his body to the burial ground in Beaucage by sleigh and dug into the frozen ground with shovels. Howards was eight years old and was so tired and cold, they let him ride back to their home in the same sleigh.

But he said this spring and summer have been very hard and lonely.

His wife has been in long term care for the past three years due to dementia, and with the COVID-19 pandemic, their visits have been severely restricted.

And because nobody wants to spread the virus to him, fewer people can drop by for chats at his home on Couchie Memorial Drive in Duchesnay Village.

“It’s like I’m in jail,” he said, echoing what many people of his generation are going through with the pandemic taking a toll on their psychological health.

Despite the seriousness of the topics covered, he jokes about not being connected to the Internet and following the news online: “I’m still on smoke signals.”

Howards quit school when he was 17 years old and went to work on the construction of the highway between North Bay and Sturgeon Falls. He did a lot of survey work as well, including many of the mining claims in Elliot Lake as the Cold War created a need for uranium.

His nephew, Phil Goulais, a former chief of Nipissing, grand chief of the Anishinabek Nation and Indian Commissioner of Ontario, remembers Howards telling many stories of his working days.

Goulais, who took Howards to the hunt camp on the weekend, recalled a story about his uncle working on the highway between Sault Ste. Marie to Thunder Bay in the 1950s. They were at a lake near Wawa and he wanted to get home to see his first child born. But to get there, he had to snowshoe out to a road and hitchhike to the highway to get a car. He got home just an hour or two after the birth, Goulais said.

While Goulais wasn’t able to call a moose in for his uncle’s birthday wish, Howards said it wasn’t for a lack of trying and he said his nephew knows how to do it well with a birch bark cone.

“They just weren’t there to come out,” he said, noting Goulais has called plenty in right to the camp so they didn’t have to go out into the swamp and work hard to bring the carcass back.

Asked if he’ll be going back out to the camp for another try, Howards said he’s not sure, describing how it’s hard on his legs walking on the uneven ground.

After a life of walking in the bush as a surveyor, preferring that to working around people or sitting in on meetings, Howards said it’s starting to catch up with him.

He said it’s easier to let the young ones get it and bring him a share.

The best part of the hunt, from what he said, was just being in the bush.

“It was nice and quiet.”