An Ornge air ambulance helicopter flying from Barrie to Toronto on Sunday was hit by a laser beam, causing possible eye injury to a pilot and grounding the aircraft - one of only 2 servicing the area - for several hours
Aug 9, 2016 8:18 AM By: Robin MacLennan 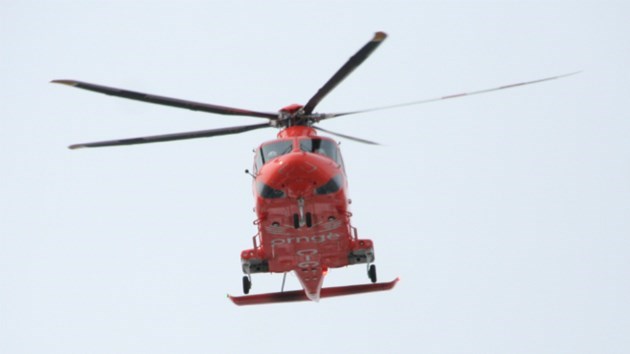 An Ornge air ambulance helicopter flying from Barrie to Toronto on Sunday was hit by a laser beam, causing possible eye injury to a pilot and grounding his aircraft for hours.

Director of flight operations Peter Cunnington says the aircraft had just left Royal Victoria Regional Health Centre to deliver a patient to Toronto’s Sunnybrook hospital when it was struck by a green laser at about 10 p.m.

While the pilot wasn’t impacted immediately by the flash of light, when he walked into Sunnybrook himself and the bright lights bothered his left eye. He was assessed in the hospital for suspected eye damage and told not to fly for the rest of his 7 p.m. to 7 a.m. shift.

“Pointing an illuminated laser at an aircraft is extremely dangerous,” Cunnington said.

“Not only is it a criminal offense, lasers put the health and safety of pilots, paramedics and patients on board our aircraft at risk.”

Because of the Barrie incident, the air ambulance - one of two serving a 250-radius around Toronto - was grounded for several hours.

The incident was reported to South Simcoe police and Transport Canada.

It was the second strike in Ontario on Sunday. Earlier in the day, a Kenora-based Ornge helicopter trasporting a patient to Winnipeg was also hit by a green laser. That exposure lasted about two minutes and there were no injuries.

Cunnington says the number of laser strikes is on the rise, and that has him concerned.

There have been 13 laser strikes so far this year, already eclipsing the 11 total in 2015 - the worst year since Ornge started keeping track in 2012. There were eight or nine strikes reported a year from 2012 and 2014.

Cunnington hopes the roll-out of night-vision goggles for Ornge pilots on night flights should cut the visibility of lasers aimed at the service’s air fleet.

In response to the sharp increase, Transport Canada launched #Not a Bright Idea last May - an awareness campaign aimed at reducing the number of incidents involving lasers and highlighting the dangers and consequences of pointing a laser at aircraft.

Transport Minister Marc Garneau launched the campaign with York Regional Police Superintendent Tony Cusimano, who arrested an individual in August 2015 for allegedly pointing a laser at a police helicopter.

"Pointing a laser at an aircraft is not only a reckless act that puts people at unnecessary risk, it’s simply not a bright idea," Garneau said.

"As Minister of Transport, I take this type of behaviour seriously because Canadians and their families deserve to feel safe while flying. We want people to know there are serious consequences, including $100,000 in fines and up to five years in prison. Transport Canada and law enforcement across the country are working together to ensure offenders face the fullest force of the law."

The "#Not a Bright Idea" website includes a short video that illustrates the impact of shining a laser at an aircraft in flight.

Anyone witnessing an incident should call their local police department.