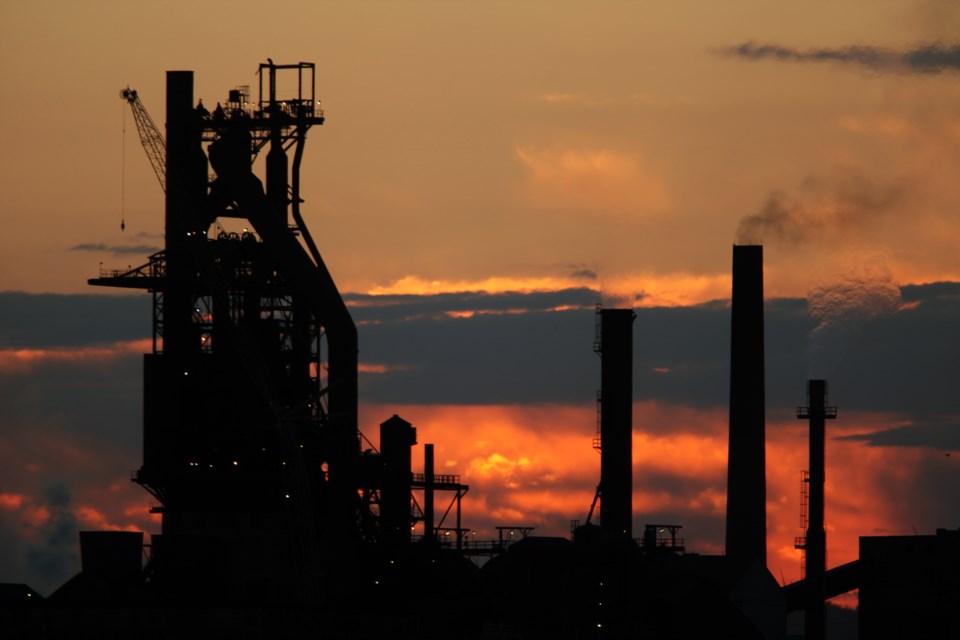 Algoma Steel Inc. is seen at sunset in this file photo. Kenneth Armstrong/SooToday

SooToday has received the following update from Brenda Stenta at Algoma Steel:

I have confirmed a total of five individuals - employees and contractors were involved in the incidents. They were transferred to the hospital for treatment and/or observation and released.

The Ministry of Environment, Conservation and Parks has been informed and the Ministry of Labour is engaged in the investigation.

Algoma Steel Inc. acknowledged Thursday that some employees or contract workers have been recently exposed to hydrogen cyanide, a highly volatile substance so poisonous it's used in capital punishment and chemical warfare.

"A full investigation into the incidents is underway in conjunction with United Steel Worker Locals 2251 and 2724," says Brenda Stenta, the steelmaker's manager of communications and branding.

An initial written statement, issued by Stenta to SooToday, says the exposures occurred during three incidents during the past week, but doesn't specify the number of workers involved in each incident, exposure concentrations, whether medical treatment was required or how affected staff are doing now.

SooToday has requested clarification from the company on those points.

The colourless hydrogen compound boils at close to room temperature, and kills through asphyxiation, interfering with oxygen use in almost every organ of the human body.

The Algoma Steel workers were exposed to hydrogen cyanide contained in condensate from coke oven gas.

"During the past week we have had three incidents involving employees and/or contract personnel exposed to coke oven gas (COG) condensate," Stenta's statement said.

"These incidents occurred in different parts of the operation but all involved the draining of COG condensate from the COG main. COG contains several hydrogen compounds, of which hydrogen cyanide (HCN) is one."

"Work is underway to contain all COG main drain lines across the steelworks to prevent any potential for exposure going forward," Stenta said.

Mike Da Prat, president of Steelworkers Local 2251 representing 2,263 of Algoma's 2,940 employees, confirmed to SooToday that his union is involved in hydrogen cyanide exposure cases and expressed frustration with the state of the investigation.

Da Prat also said the problem has been occurring "for a while," not just the past week.

Minutes of Local 2251's most recent membership meeting, held nine days ago on Feb. 18, quote Da Prat as stating "that there were issues with walkways, exposure in the coke ovens byproducts of benzene and hydrogen cyanide."

The minutes also record: "Code 14s issued and that there was a meeting with Dr. Bishop over the exposures. He also spoke about discipline for health and safety issues."

"Exposure to hydrogen cyanide can be rapidly fatal," states the U.S. National Institute for Occupational Safety and Health (NIOSH).

"It has whole-body (systemic) effects, particularly affecting those organ systems most sensitive to low oxygen levels: the central nervous system (brain), the cardiovascular system (heart and blood vessels), and the pulmonary system (lungs)."

The hydrogen compound, described by the U.S. Environmental Protection Agency as "extremely toxic" to humans, is known for its distinctive odor, said to be similar to bitter almonds or old sneakers.

But many people are unable to detect it and the smell doesn't provide adequate advance warning when present in dangerous concentrations.

"Explosive potential is severe when hydrogen cyanide is exposed to heat or flame or to alkaline agents," states the NIOSH website.

Meanwhile, Stenta advises SooToday that the large amounts of black smoke seen coming from the steel mill earlier Thursday had nothing to do with the coke oven gas condensate exposures.

"Regarding the air emission earlier today, shortly after 11 a.m. during the process of beaching iron, the molten iron came in contact with ice that had accumulated in the bottom of the pit and resulted in a particulate emission, largely comprised of iron oxide," Stenta said.

"While precautions are taken to eliminate water, snow or ice from the pit prior to beaching, no ice or snow was visibly detectable at the time. No one was injured and the Ministry of Environment, Conservation and Parks has been notified."