A Barrie city councillor says parents should transfer their teens to St. Peter's Catholic Secondary School, rather sending them to an over-crowed Innisdale Secondary School this fall
Aug 9, 2016 8:17 AM By: Robin MacLennan 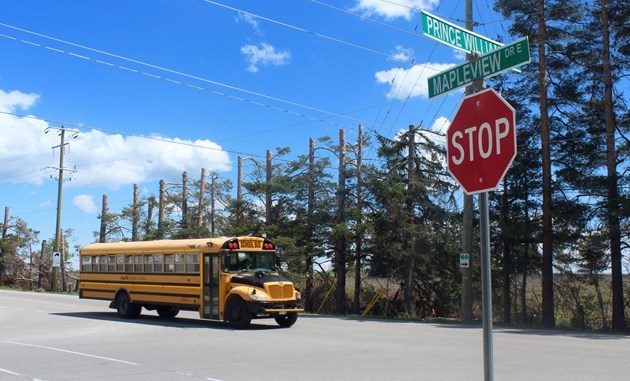 A school bus passes the site where a new high school is expected to be built. Robin MacLennan/BarrieToday

A Barrie city councillor says parents should transfer their teens to St. Peter's Catholic Secondary School, rather sending them to an over-crowed Innisdale Secondary School this fall.

“Without Barrie Central, and with Barrie North under construction, and the south-east high school not actually being built until 2019, Innisdale is going to be bursting at the seams” says Ward 9 Councillor Sergio Morales, whose Ward falls in Innisdale’s feeder area.

“You couldn’t make up a worst scenario for students to be in if you tried, but unfortunately, that’s the plan the public board has decided to double-down on. Regardless what they plan, I believe it is imperative for parents who are concerned that their children will spend their entire high school career in a crammed school or a portable, to consider the best option available to them: transfer & enroll their kids with the separate board.”

Morales says the city is set for "the perfect storm" in education, thanks to poor planning by the SCDSB.

Board chair Peter Beacock was surprised to hear Morales encouraging parents to transfer children to the Catholic board.

"However, he is entitled to his opinion. I invite him to contact our school board for the facts so he can provide his constituents with accurate information in the future."

Beacock went on to say "the negativity won’t dampen the school spirit and positive outlook at Innisdale."

"t’s a great school and it will continue to thrive."

With the closure of Barrie Central last June, about 200 additional students are set to attend Innisdale, bringing the school population to about 1,750. There will be 19 portables on site - the same number there during the 2015-16 school year.

"The school has the space for its students," Beacock concluded. "We have no concerns. Innisdale has had this population in the past."

Cloudy day with showers and the risk of a thunderstorm
0