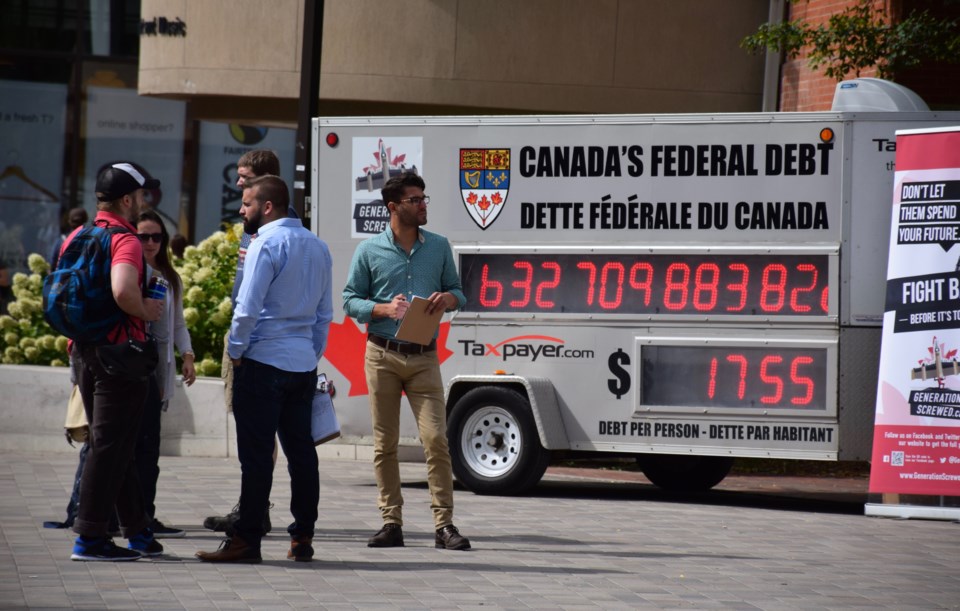 A debt counter was parked on U of G campus Wednesday by the Canadian Taxpayers Federation. (Rob O'Flanagan/GuelphToday)

A big digital counter, as big as a U-Haul trailer, was parked at the University of Guelph’s Branion Plaza Wednesday morning, an effort by the Canadian Taxpayers Federation to jolt students into realizing just how much red ink there is in this country. All that debt will be on their backs.

Called the Generation Screwed campaign, the traveling counter counts, moment by moment, the ever-escalating national debt in this country.

Every minute adds roughly another $1,000 to the debt in interest charges.

While the “National Debt Clock” sat parked in front of University Centre, it grew to over $632.7 billion. Many students appeared indifferent to the mounting debt, but many more stopped to inquire.

CTF says the federal government has added $168 billion to the country’s debt since 2008. The debt amounts to the equivalent of just over $17,500 for every person living in the country.

The accumulating interest could pay for important things like post-secondary education.

“We’re trying to get students to understand just how much debt they’re being left with, and that they are going to be left to pay this, with interest, in the future,” said Aaron Gunn, executive director of Generation Screwed. He was joined in Branion Plaza by Dave Paquette, the U of G campus coordinator of the campaign.

Gunn said if the government doesn’t get spending under control and debt continues to rise, the younger generation will be left with higher taxes or reduced government services in their future.

Paquette said that while many appeared disinterested in a whooping big number on the debt counter, many students gravitated towards it and asked questions.

“A lot of those who stopped to look at it haven’t really taken into account what government debt is or what deficits are,” he said. “But when they see it growing by almost a thousand dollars a minute in real time, they see that this might be an issue. When they see that money is just going to debt payment, they realize it could have been spent by the government on students, for students. Then it makes an impact on them.”

The campaign is also an opportunity to get signatures on a petition that will be delivered to the current government, calling for debt reduction measures.

Crowdfunding campaign set up to find who shot white moose
Nov 23, 2020 2:00 PM
Comments
We welcome your feedback and encourage you to share your thoughts. We ask that you be respectful of others and their points of view, refrain from personal attacks and stay on topic. To learn about our commenting policies and how we moderate, please read our Community Guidelines.

About the Author: Rob O'Flanagan

Rob O’Flanagan has been a newspaper reporter, photojournalist and columnist for over twenty years. He has won numerous Ontario Newspaper Awards and a National Newspaper Award.
Read more

Sudbury man among those caught in Parry Sound drug bust
0