Homeless in North Bay in a pandemic: 'All the negativity around us being homeless; it hurts' 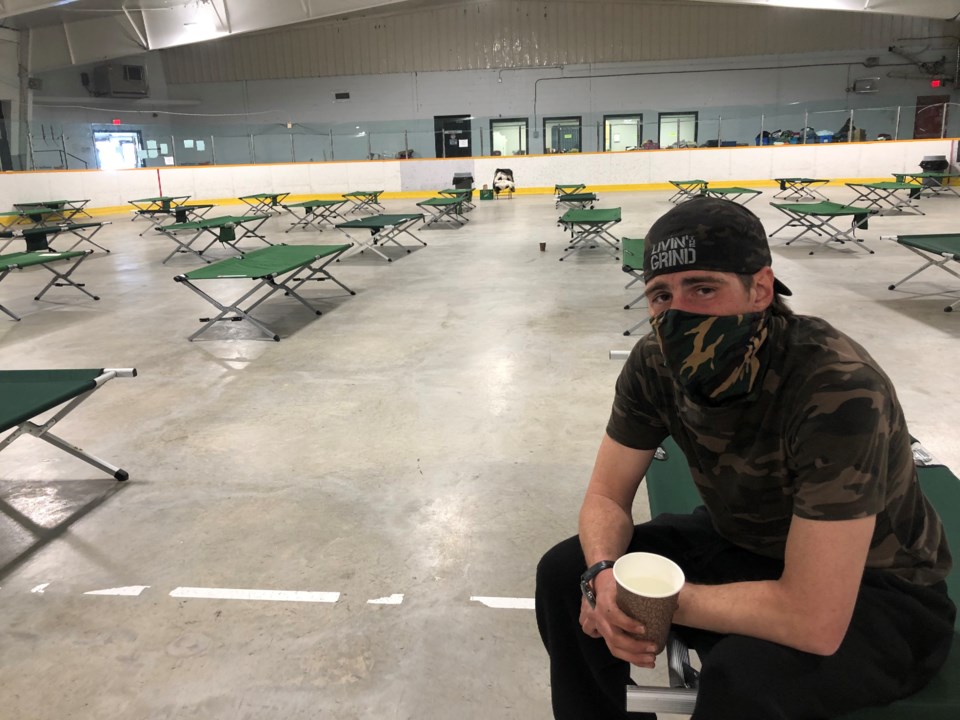 Ron, a 34-year-old North Bay man, is one of the homeless staying at the shelter at Pete Palangio arena. Photo submitted.

Ron is one of a number of homeless people who are now calling Pete Palangio arena home.  The rink was set up as a 24-hour low barrier emergency centre back in mid-April due to COVID-19.

He moved back to North Bay last June at the request of his mother. However, his plan to move in with some friends fell through when they were evicted from their apartment.

"So that's how I started living outside," he said.

Ron says he been homeless, off and on since he was 16 years old.

He believes the new facility at Pete Palangio arena has been a great help.

"For a lot of people who do not have basic survival skills like building a shelter in the woods or anything, it is ideal for them and me," he said.

"It is nice to have a place to turn to when you have no other place to go. It is very well managed and the staff is great. They try and help you out as much as they can.

"The thing here is you have good meals, showers, which is fricking great. A lot of other places when they had them open had no showers and you just slept there. Having a shower facility and get clean clothes and have a bed to sleep in when it is really cold outside is great, it is really helpful."

He says many people don't understand some of the good that is happening inside these doors.

"There is a lot of good growth here and some good connections have been created for these folks and provide a place for these people to feel safe," said Eade about the connections to medical and social services available at the shelter.

"It is a struggling time for a lot of individuals out there regardless if they have any issues with homelessness or mental health or addictions or anything like that."

Kyla Venturini is a Team Lead at the facility. She says clients are screened as many as three times a day for temperature checks.  One pad is where the majority of cots are set up, while the other rink is being used for those who have COVID-19 symptoms.

"Once they are here and staying they are actually well supported," said Venturini.

"So we are doing what we can to screen and reduce any onset risk of COVID and making sure that everybody is healthy and well as well as connecting them to supports such as finding housing or anything else they basically need."

Ron, who has struggled with mental health and addiction issues in his past, says the staff make them feel like equals. However, he says that is not the case outside of Pete Palangio Arena. He says it's a struggle because of the stigma behind being homeless.

"Who wants to hire a homeless guy? It makes it really hard sometimes," Ron said.

"All the negativity around us being homeless; it hurts. When you hear some of the things people say, it really bothers you at times."

On top of that, he has heard the bad reputation that the homeless people are getting around the Pete Palangio neighbourhood.

"We are not all bad people," Ron said.

"Sometimes people have things that go wrong in life and they can't control it.  Yeah sure some of us have addictions, some of us have problems, but not all of us are complete assholes."

But Ron realizes at the end of June, this facility could be closed or transformed back into an ice arena. Ron is not sure what he will do then.

"I am still trying to find an apartment myself and look to split the rent with a friend or two," he said.

"If that does not work out, my backup plan is building a shelter and keep living in a shelter."

Eade says the shelter has allowed them to have the homeless population in one centralized location where, hopefully, they can find help.

"You never know what is going to come out of these bad situations but hopefully people will continue to be more aware and understand that this is a problem in North Bay and we have to do something about it more long-term so the silver lining is probably there somewhere," said Eade.

Construction delayed on North Bay casino
May 21, 2020 4:00 PM
Comments
We welcome your feedback and encourage you to share your thoughts. We ask that you be respectful of others and their points of view, refrain from personal attacks and stay on topic. To learn about our commenting policies and how we moderate, please read our Community Guidelines.